I know, I know. I’ve already made a thread before… a couple months back. But thought I’d make another one because… why not? If you want to participate, welcome!

You can ask me or anyone else here a random question on any topic!

If you’re researching something or curious, some topics I can talk about are…

What was your favorite ocean-swimming location?

Oooh, what kind of ghost experiences have you had? ヽ(°Д°)ﾉ

How do you feel about Powerwolf?

Being a bridesmaid and going to a sort of traditional Catholic wedding (with a mix of Mexican traditions).

Here’s an oddball one:

What skills have you learned in the hotel work that has helped you in the library?

What was your favorite ocean-swimming location?

Virginia Beach for the best sand, but Long Beach (California) for the best waves. Virginia Beach has soft sand with very little rocks and debris, but many beaches I’ve been to in California (both southern like Long Beach and northern like Santa Cruz beach) have a ton of sticks poking out, so it’s not super fun to walk on. But if I remember correctly, VA beach has decent waves (like not too big, but not too small) while Long Beach gets these amazing waves… even to a point where they might close it down for safety. xD

Is there an ocean-swimming location you really liked?

Oooh, what kind of ghost experiences have you had? ヽ(°Д°)ﾉ

My whole family has experiences, but to keep this post short, I’ll just talk about my own since there’s only been a couple. But if you want, I can talk about what we’ve all experienced?

Before I move on to this first story, though, there needs to be a small bit of clarification. I have quite a large family, but there used to be one other sibling. Someone I’ve never met before. That’s because he died a few years prior to my birth. His name was Dirk, and he was six years old when he passed away from getting hit by a drunk driver. He would be thirty-two years old today (1988–1994). There is quite a bit more odd experiences my family (particularly for my parents and one of my sisters) has experienced that includes him…

Have you had any experiences? Or do you believe in ghosts?

How do you feel about Powerwolf?

I’ve never heard of that band until now and I just listened to some of their songs. Pretty cool. I found a couple that were good.

How do you feel about them?

Our dresses were purple, long and flowy, and strapless. xD

But here’s a picture to better describe it, haha. 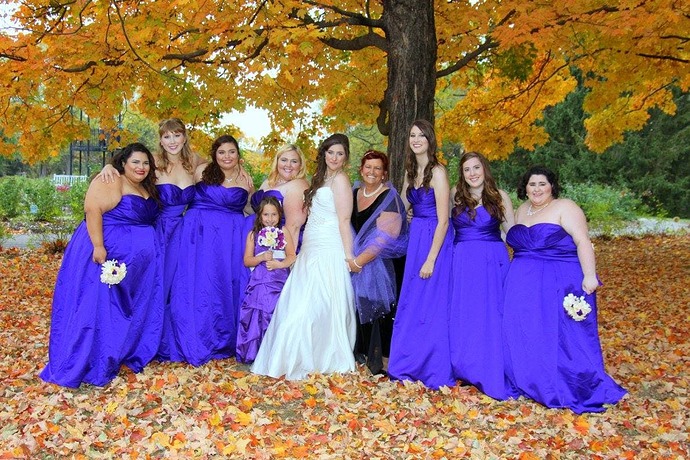 I’m on the right with the short black hair. My three sisters are in the middle (of course, the bride; my little sister up front, my oldest sister next to the bride (blonde)) and my mom in black.

What skills have you learned in the hotel work that has helped you in the library?

Before going to night audit (front desk), I did the “lower-classed” jobs like dishwasher, breakfast attendant, pool attendant (just a glorified lifeguard), etc. At the hotel I used to work at, I started as a breakfast attendant. It was hard labor, but never had to deal with guests (technically). Heck, I barely talked.

The main question at the time was what would happen when my parents left (my mom managed the hotel). We came in June of 2019, I started doing breakfast in September. My parents ended up leaving to Texas for another job in March of 2020. Since it would go to new management (an employee who’d been working there for years; my mom was supposed to show her the ropes), they were unsure what would happen to me since my sister and I were staying. I’ve never had an actual job before where I went through the whole process. And the library had an opening just before my parents moved, which I did put in my application and walked in to hand it over, but they turned me down and said they already found someone…

But the hotel manager never fired me, and I stayed on as breakfast attendant. Until COVID happened.

They shut down their hot breakfast and the lobby, and instead, creating to-go bags. At that point, there was no need for a breakfast person to do anything since night audit starts the breakfast (and could easily make to-go bags since it was pre-packaged stuff). But they became short staffed at the front desk. One night auditor was fired for putting his membership account on other people’s accounts (so he’d earn points for the duration of someone’s stay). And the other night auditor quit because she’s an older woman with medical problems and was scared to get COVID. It’s hard to find a night auditor, especially a stable one, and when the job posting landed online, my parents found it and told my manager to use me… which gave me a small promotion.

My manager only trained me for two nights, on our slowest days. She showed me the basics, but there was still a lot I didn’t know until later on… and even then, there was still more to know that I didn’t (about the computer system). There were plenty of times within those first few months where she had to come in at 3am to fix something because I didn’t know what to do, and I’m thankful she did because most other managers wouldn’t.

But honestly, there wasn’t much to learn since I got the gist of customer service as I live in a family who is in multiple customer service industries. I’ve heard all the crazy stories, seen the worst from people, and it was a reason why I never wanted to be front desk at a hotel (one of the worst you could be). But I did it, and considering I was in a customer service position for two years, I believe it helped me land the library job. c:

Truthfully, while my job is still in customer service, it really is a step-up because I don’t get people yelling at me for things I have no control over anymore. Or haven’t yet, anyway. The worst I’ve dealt with so far within these last few months are rude people who have no patience or aren’t appreciative. It’s not often, though. Most people have been nice.

There was this one guy recently, though, who spoke Spanish and needed papers printed off from a thumb drive. We can’t use the front computers because they’re not connected to a printer, so I had to use my computer in the back to pull it up and print it off, and the guy didn’t understand why I was using my computer and said in what little English he knew, “If it’s a problem, give it back.” And he was rude about it, too. I told him to calm down and that I can print it off for him… did so, handed everything he needed to him, and then he threw a fit over why I couldn’t use the front computers.

Have you had any experiences? Or do you believe in ghosts?

I’ve personally had no experiences with ghosts myself, but my mind’s open to the possibility of their existence. So many people have reported strange things through the centuries that it’s hard to just write off those things as unexplained but logical occurrences. ¯\_(ﭢ)_/¯

At least it gave you a little bit of prep for the job. And yeah, librarians still deal with dingbats.

How do you feel about them?

Spotify told me that they were my favorite band, and considering my pfp is now a powerwolf wolf, I can’t argue that.

They’re in a weird place in terms of popularity-super popular but very underground at the same time.

So many people have reported strange things through the centuries that it’s hard to just write off those things as unexplained but logical occurrences. ¯_(ﭢ)_/¯

That’s another reason why I believe in them. Even though I’ve had a couple experiences, which could’ve easily been my mind playing games or debunked, things like this have been happening for ages that it’s kind of hard to ignore. Sometimes there is an easy explanation, but not always.

At least it gave you a little bit of prep for the job. And yeah, librarians still deal with dingbats.

Haha, I think everyone does at some point. Even if you don’t work in customer service.

What about you? What do you currently work for, and what do you think helped you get there? c:

I worked in retail, both food and then as a manager for a discount store.

So I’m used to delinquents who destroy everything, Karens and their progeny, and cooking meals that lasts all week for “there’s not enough pay for me to put up with this”.

Typing this after my son broke a picture frame and was spraying blood everywhere from a tink nick in his finger. He’s good now.

I’m on the right with the short black hair. My three sisters are in the middle (of course, the bride; my little sister up front, my oldest sister next to the bride (blonde)) and my mom in black.

Ahhh wow you all are so pretty and the dresses are so beautiful!

Ahhh wow you all are so pretty and the dresses are so beautiful!

The dresses were so beautiful, definitely! I loved the colors she picked out!

Just came across this, what do you think about it? 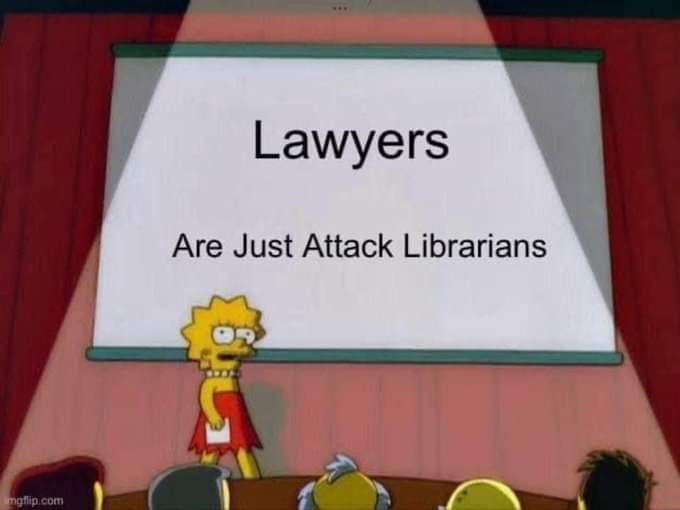 I mean, the research for others can be heavy when done right in either field.

I mean, there’s no lie in that. xD You get college degrees, you do heavy amounts of research… the only difference is that librarians are chill and lawyers aren’t. xD

Any truth to the type A personality, Lawyers own that.

I just realized I posted that message about Meg LaTorre in the wrong AMA thread. Argh! But I’m guessing you’ve seen that she’s back on YouTube? ¯\_(ﭢ)_/¯