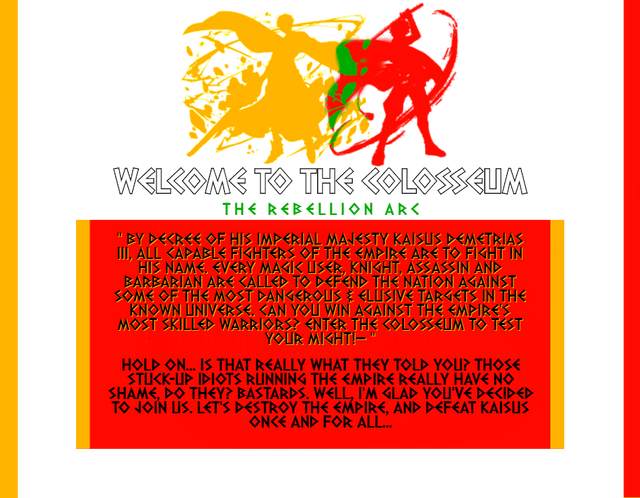 Due to the Colosseum’s exponential growth, it has been decided that specific Military Officials will dictate and monitor the organisation, in His Imperial Majesty’s stead. Follow their words as if they were his own.

If you are against the Emperor and his vision of world domination, be prepared to battle these Military Officials. They will show no mercy to traitors…

A low power level character. Although not defenceless, they can’t destroy large objects or use high energy spells. Base stats are average, albeit a little higher. Even though they’re considered ‘weak’, they have the most room to grow and will likely become the most equipt fighter in due time.

A low-medium power level character. Capable of destroying small rooms with a single move. Base stats are higher than average, although not greatly so.

Highest tier of low-level character, and the highest level a new character can be placed. Characters in this rank have certain base stats considerably higher than average. They also have a powerful ability/equipment that accompanies their higher base stats.

Characters in this rank are now a noticeable force within the Colosseum universe. Most, if not all their base stats have exceeded 10 and they have extra abilities and equipment to rely on. These players are on their way to greatness!

Your character has now joined a side. The Empire, or the Rebellion. Fight the best you can to ensure your team wins! Your abilities and stat levels prove you worthy of fighting a battle greater than anything seen before. Good luck!

Now armed with considerable experience, Primus ranked characters have explosive power at their fingertips; such characters can destroy buildings and large objects with little effort. Fighting against one of them would result in a quick bloodbath if you weren’t prepared…

Your character has now earned a title worthy of their name. Those ranked Hastaii are now well known throughout the continent, being both powerful and an untameable force with no sign of slowing down. Now wielding ultimate abilities, these characters can unleash hell on small towns and villages with a flick of their finger…

Still armed with their continental reach, these characters are people that fight it out in victorious and epic scenes. An entire city can become their battleground, weapons and magic abilities alike unleashing hellish destruction in their wake.

Reserved for the most powerful beings known on the planet, characters ranked Deus have supernatural strength, smarts or equipment that makes the powers of those ranked below them look like child’s play. Deus-ranked players have powers that can affect a whole country given enough time. Such people have ascended to demi-god levels and should be approached with caution and respect. Quiver in fear, as these players are your ruling champions!

These ranks can refer to a single entity, organisation, situation or event.

A small-scale enemy. Can’t do extreme levels of damage when fighting, but not be underestimated nevertheless. They will take advantage of any opening you give them.

Opponents here are nearing the level of a medium-scale enemy. If left unchecked, they are capable of destroying smaller villages and areas. Easy to take down if the player is strategic enough, somewhat prepared and of a higher level.

Medium-scale enemy. If left uncontrolled, a localised alert may be issued to civilians in the surrounding area. Capable of destroying smaller cities and areas in reasonable time. Typically, such opponents cannot be defeated by a character weaker than them.

High-threat enemy. Those preparing to oppose this threat must put in thorough planning and preparation to ensure the best chance of success. If Champions are unable to control this opponent, the capital city of the Empire can be destroyed in only a few days. Most likely to be a single target, but a small group or organisation can be categorised at this threat level. Collaboration with other players should be considered. Do not engage without a solid plan! You have been warned…

Extremely high-threat enemy. Most likely a group or organisation, but a single being is also possible. Group collaboration is strongly recommended, if not required to defeat this opponent. When left to their own devices, destruction of the Imperial capital and surrounding towns is assured. Only the most powerful individuals can be sent to tackle this opponent. The fate of the entire Capital rests on your shoulders. Don’t let us down…

And yes, you are meant to write the opponent into the response as demonstrated. This is meant to help you formulate a battle scene for yourself. Also, I can’t role play with your character. It’s all part of the fun! Write your opponent as you see fit, but keep in mind their level and abilities posted. Follow them! Also, don’t even think of posting a response that results in your character ‘one-shotting’ the enemy!

You don’t need to write about all your character’s/opponent’s abilities either! Just what you feel is relevant to your prompt response.

Small snippets unfolding the past, present and future will be placed here, revealing the Rebellion Arc’s storyline when certain criteria and checkpoints are reached. Dive into the Empire’s history, for all shall be released in due time…

There will be specific individuals in your faction guiding you, every step of the way. Whilst in ranks Centurion and above, they will be the people assigning you your missions. Be aware that you may face them in battle one day. It’s time to report to HQ…

13 Likes
Epic Battle Game ⚔️ Epic battle for your characters! 🛡️ (SUBMISSION OPEN FOR THE ANNIVERSARY ROUND)
kabanerry December 8, 2020, 5:00am #11

Turns out I can finally say this.

We’re closed to new members and I’ll withhold the new prompts for now, since I’m planning on sorting out new character forms first. Get everyone back on the forums and used to it again.

Finally. I was tired of talking to myself on Discord

or if I want to submit at all. Hmmm.