Can someone tell me in simple terms what this word means?

I looked it up once and got so confused.

The word is: Kardashev Scale.

How can I even incorporate that into one of my three novels for a little bit?

So, can anyone tell me, kindly?

I’d never heard of this before now, but from what I gather from the Wiki page, it’s a method of measuring a country’s level of technology using energy output as the metric…? ¯\_(ﭢ)_/¯

The Kardashev scale (Russian: Шкала Кардашева, Shkala Kardasheva) is a method of measuring a civilization's level of technological advancement based on the amount of energy it is able to use. The measure was proposed by Soviet astronomer Nikolai Kardashev in 1964. The scale is hypothetical, and regards energy consumption on a cosmic scale. Various extensions of the scale have since been proposed, including a wider range of power levels (types 0, IV to VI) and the use of metrics other than pure p...

A scale is described for classifying civilizations according to the amount of power they produce, using the whole numbers 0 through 4 to denote 106, 1016, 1026, 1036, and 1046 W corresponding to the approximate power available at physical scales...

okay okay, so, i made a bad pic but basically the Kardashev Scale, as explained by Harvard, is a measurment of How much power a civilization has compared to How much power is available. So if you have ALL THE POWER AVAILABLE EVERYWHERE you get the highest score. And if you have ALL THE POWER BUT ONLY ON YOUR PLANET you get not as high a score (because there is still power available that you don’t have). 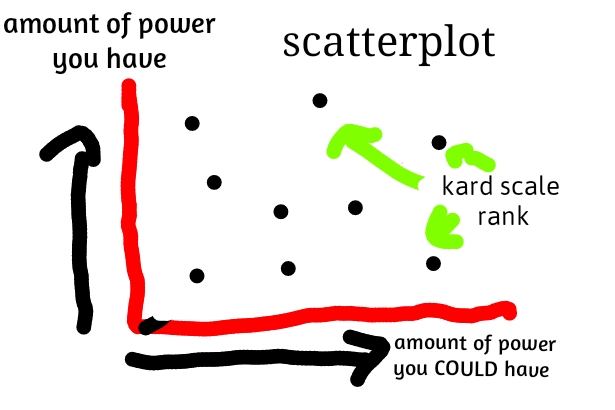 as for how you incorporate it into your writing, that’s for you to decide. I saw a quote from Doctor Who about it while i was searching.

I KNEW MY NEDRDOM WOULD COME IN HANDY ONE DAY

Short version: It’s the level your civilization is on a theoretical universal scale. It’s based on the technological capabilities the civilization has at one time and ranks them. For example: Earth is slowly approaching a Type 1 Civilization

I totally do NOT use this in my series at all. Nope. Not even a little

As for putting it into your writing, I don’t recommend doing so unless your story has Sci-Fi elements and that it’s an important feature

As for putting it into your writing, I don’t recommend doing so unless your story has Sci-Fi elements and that it’s an important feature

That makes sense. My story is science-fantasy, but I am starting to see that it leans more on the fantasy side of things.

Great, now I need to know if a certain genre exists.

Thanks for answering my question.

So, is there a number on the Kardashev Scale where reaching it is the equivalent of reaching godhood?

yeah, officially the scale only goes up to 3 (or 4?) so a score of 3 or above would be like, universe eater level

Great, now I need to know if a certain genre exists.

i can also help with this. probably more, tbh, since my certification will be in library science eventually.

Is there a such thing as a modern fantasy genre set on a magical fictional planet?

I know urban/low fantasy exist, but those are mostly set on earth.

I am talking about that yet set in a fictional world where modern tech and magic coexist side by side.

hm, so there are several ways you could label this (which is a statement you could apply to so much sff lol) it mostly comes down to personal preference rather than hard rules.

Since you’re specifying “different planet” that would be high fantasy, because it takes place somewhere other than Earth. Or, if Earth still exists and your characters are from Earth and simply get transported to this other planet, that would be Crossworlds fantasy.

As far as the level of technology goes, there are lots of subgenres it could fit into. Futuristic fantasy is one, it has a lot of scifi overlap because of the advanced technology that gets included. Arcanepunk is another, if the magic and the tech are butting heads. Contemporary fantasy would probably fit best if you’re writing it with a modern level of tech.

So, i would say
Genre: Fantasy
Subgenres: Contemporary, High (or contemporary, crossworlds)

Sorry for the late reply.
Thanks for letting me know.

That makes sense. My story is science-fantasy, but I am starting to see that it leans more on the fantasy side of things.

Mine’s also science-fantasy but its a little more scifi. But, yeah, if the Scale works in the context of your story and is actually an important feature that will be mentioned, then use it