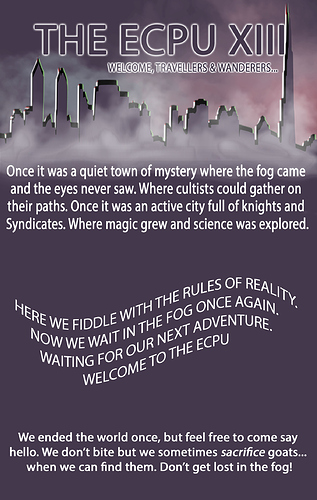 Meta summary:
The City of Elgin ARG was the first ARG and started with ominous badges being handed out to people on the forums. The first ECPU was created once people started to notice. After much theorizing about the badges and a rumored curioshop, one actually appeared, with an NPC you could interact with. From here the actual plot began. A lot more happened and we can only recommend looking at the full timeline in the Codex. to get a sense of how much. The game concluded with a worm god apocalypse roughly a week after people started theorizing.

Meta summary:
Neo-Tokyo ARG was the second ARG run here, and started with Nick’s cryptic clues. The Neo-Tokyo category was created to be a ‘city’ in the forums, and Nick asked for ideas and art for the game. The city opened and the game officially began on July 9th. Soon, clues appeared and the plot began. People were able to join one of six different groups, and some groups got special pieces of information. There were NPCs you could interact with to get more clues. For more information we recommend looking at the full timeline or full story in the Repository. The game concluded in the middle of August 2019, this time without an apocalypse.

(Or at least, a condensed version)

What is the Codex?
In 2019 an ARG was created by someone called Nick. The Codex was a thread made up of wikis, where users who participated in the Elgin ARG accumulated their information. These posts concerning the Codex will probably not be of much interest to those who didn’t participate.

(Or at least, a condensed version - I don’t know how I’m going to do this cause the Rep is very big)

(Information on the ARG/treasure hunt on these forums)

If you’re new to ARG stuff, please read this first.

Maybe if I decide to condense the grim later?

Heyyy, we are back!

The first recap is here too!

This is the link

Okie dokie! I should tag… @flyingCouch @Spider-Hawk @Theora I know they are on these forums

I honestly have no idea how much of our gang is here. Zella is here, too

Yeah, not sure. We have something Joy, Star, CJ, and a few others have put together… ARG style

Kylan is here as well. New username though.