Epic Battle Game ⚔️ Epic battle for your characters! 🛡️ (SUBMISSION OPEN FOR THE ANNIVERSARY ROUND)

I’ve made a decision!

PRIVATE: DO NOT OPEN

CLASSIFIED INFORMATION This document contains confidential information that may only be viewed by authorized personnel for the purposes of EBG. Handling, reproduction, and distribution without the consent of The Alliance Of Paranormal...

It’s okay y’all have a pass

Name: Elise Ancilla, The Creeping Dread Age: Unknown, suspected to be 17 Gender: Female Species: Felind (Catgirl) Appearance: Elise is a petite cat girl with short black hair along with small black cat ears and tail. She is said to have a kind and...

idc if she can fuck me up

So much new submission and I can’t wait to check them out soon! 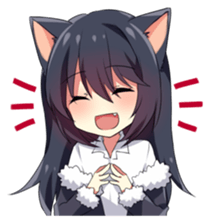 Alright, reading her backstory in all of its glory, and I think you did good in explaining her story without revealing too much. I think this should be sufficient for the purpose of the round. We know her problems, the issues in her personality and mindset, which tied to her deepest fears.

Anyway, we have no idea how strong she is as a person, but one thing for sure, she’s stronger than what she looks. Though we really need to know more in detail. Because her ability section is empty, then you should explain the basic of her capabilities there. How much strength she can muster, how much skill she got in combat, how hard to kill her, and such things.

Same case with her puppet. We can imagine how it looks like, but we barely know anything about its capability other than two; it move fast and its claws can be adjusted in length.

The biggest question is Qila’s greatsword. I assume that its physical property is the same like any ordinary greatsword, unless that it’s certainly not a common weapon. When you said that this channels the Iron God’s power through prayer, what does it do anyway?

You’re next you capybara @Benxall

Ahh yes a rad skeleton dude, seems like a great addition to the supernatural team
And boy do his personality really contrasting with his identity xD
Seeing his tragic backstory filled with rage of war and suffering without joy though…
Yeah, I can understand why he’s like this…

Anyway, combat-wise in general, his stats and everything else seems good for the game. Nothing to nerf and nothing to buff either. My only question is the effectiveness of the ghost guards. They can only manifest physically for 6 seconds, barely enough for quick acts. So I guess that each of them will only be fighting once per day, and only for very short moments too? Which mean, outside of those 6 seconds, they would not even manifest and just like… wait can we even see them outside of those 6 seconds? Just wondering how Palma looks like when he’s outside of the battle. Would be cool to see him just walking and there’s army of ghost around lol

Well, the ghost are visible to everyone and are always right besides him, but they can retreat into Palma’s body as a way of becoming non visible, altough they only do that when entering towns to not botter the people.

After their 6 seconds, they are forced to retreat into Palma to recover too.

Name: Blank Age: Unknown Race: None Species: None Origin: Verudian Woods Music: https://youtu.be/Pt9ZMA9LQNc https://youtu.be/y0_up7G34ak Appearance: Blank is a smooth white wooden puppet with no facial features at all. Yet it’s hands and feet are...

Okay sure we’ll see how it goes later lol

So the Amista here and the canon version is different?
Because the “Round Backstory and Appearance” suggest that this is an alternative version of Amista based on the setting of the round, so her identity, and even her backstory is different.

Oh my god we got a canonical Indonesian character in EBG, I’m losing myself

Alright, time for some blood sacrifice and origami time! Her abilities are very unique- Dare I say, one of the most unique design of power on the round so far. Definitely no nerf or buff needed, considering everything. Seems like she’s going to be the scout of the game, best for exploration, and would be good as our guide. That being said, her Internal Force makes her a capable fighter too. All in all, seems like I can just accept her without any change!

Anyway, it’s ironic how an outgoing tomboy get represented by the sin of Sloth…

All of the fears and other issues could make a really interesting Nemesis, though I still questioned the sin that represent her. I guess, getting all the easy access to almost everything makes her somewhat lazy because she can got all these practical features.

I determined she was burdened by sloth because of her reliability. People who are strong from the start tend to give up easier than those who were weak and had to bounce back all along. She can’t handle failure well, that is why when she fails she is shocked and loses her motivation to do anything like when her mom died.