I have a lot to say about covers and design. It’s been 7 years in the making. I won’t say I’m free from being critiqued. I’m still learning, too.

Examples of my year 2021 covers

If you think a thought or two from me might help, drop your cover. You can drop two or three versions of the same one if you want to show me your progress or something. Covers can be ones you made for yourself, for someone, or just for fun. It can be a mock-up too if you just want some thoughts on how the design looks.

My suggestions will respect your style. If you do simple, great! Faceclaims? great! Horror? great! Dark colors? great! Anything is fine, I’ll help you in any way I can while keeping to your style.

Also note that I’m not a professional designer. I’m self taught (almost 7 years now). If something I said sounds weird, find a professional on here and ask them. They’re everywhere

Why do I offer this for free? Well, I like to help budding covermakers, and I like seeing people grow in their covermaking journey

If something I said sparks some idea or inspiration in you, then, well, that’s a job well done for me

You can come back as many times as you like. Do fill out the form if you want an in-depth critique.

Form:
Cover (current and previous versions if you have):
Mood / Vibe of the Cover:
Genre:
Specific Questions if any: 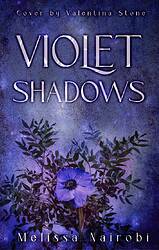 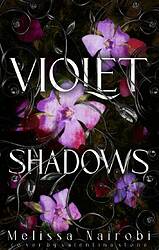 Mood: Dark, but like a fantasy allure that draws you in. (as the requester specified)

Specific questions:
This was one of the inspiration pictures provided and this was the request: My object Base would be (my preference) a bloody Violet (the flower, not the color lol). I think A bloody violet would be more dramatic. The details would include the front of the cover would be a silver gate covered in blood. In between parts of the gate (refer to links for better use) there will be bloody violets. The background beyond the gate is a light, peachy color to draw the eye to the blood and violets (opposite color). If possible, I would prefer the gate to look gritty and kind of old but with an overall dark tone.

Obviously, I did that only on one cover. For the other one, I just followed a bout of inspiration. I want to know how close you think it matches the request. And any suggestions?

First off, both are beautiful covers

I do think the one on the right, closer to the requester’s inspiration picture, would be better. (Although, as the covermaker, you can say, here’s another version, and see if they like it. Sometimes people can surprise you XD )

Thank you! I am planning on offering both and letting them choose whichever cover they want to use!

Oop- They were actually much darker, I added in overlays to brighten on purpose lol. Guess I overdid it! I’ll reduce the brightness, thanks!

So, I’ve been ghosting around your thread for a while . . . but it took me a couple of days to gather up enough courage to post something here . . .

So, while I was in the wattpad forums, I designed some covers for several authors. I was a complete noob in cover making then. I’m still kind of a noob, but I think, I kinda gathered some knowledge. So, I decided to do redos . . . just to check my improvement and I would love to hear your opinions!

Cover (current and previous versions if you have): 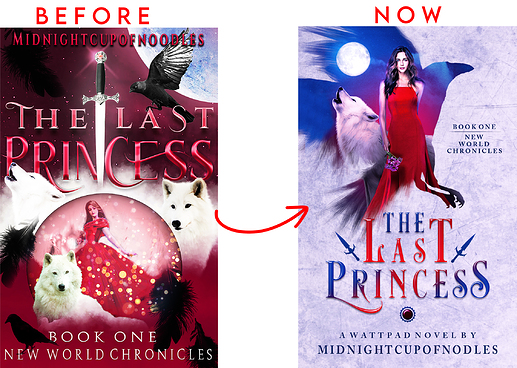 Mood / Vibe of the Cover: This is one of my problems. I sometimes completely suck at reading moods. I think, in this case, it’s fantasy.

Specific Questions if any: As you can already guess, the book is about werewolves and stuffs . . . also, there’s a crow and a dagger - they play some sort of roles in the story. Now, I tried to show these elements on the cover. My problem is, did I overdo it? Cuz I think, in the first verson, I kinda overdid it and it looks jumbled.

And how can I overcome this problem?

Okay, I think I’ve said everything I wanted to for now.
Thank you for this opportunity!

Cuz I think, in the first verson, I kinda overdid it and it looks jumbled.

Yes, very jumbled, but can I just say, I like how the text is partially behind the wolf on the left and I do like that red text. Also, great font choice

It just looks like it belongs with words like princess or prince or duchess or something along those lines.

My problem is, did I overdo it?

Okay, back to my thoughts

Omg, it’s so much simpler and my eyes are attracted to the picture and then the title. That’s exactly what I want to look at when deciding whether to pick up a book or not. I don’t find it to be jumbled in terms of the elements you put on it.

The daggers as part of the title design works really well. In fact, I didn’t realize they were there until I read your explanation (or it could have just been because I’m tired XD). But it looks good to me

Although, I do feel like there’s all kinds of colors going on because of the title. Still a bit clunky there. Maybe the title should be all in one color? All red or all purple? There’s a bit of purple on the crow silhouette so maybe try that one? Or, what if you tried the same pinkish red you used for the first version?

Also, small thing, something about the shadowing on the lower bit of the girl’s right arm makes it look like she’s missing an arm. Idk how you would fix this, if you do decide to. Anyway, just thought I’d point that out because it was one of the first things I noticed

This is one of my problems. I sometimes completely suck at reading moods.

Moods is usually like maybe you want to show that the story is foreboding, calm, happy, romantic, epic adventure, whimsical… From what I’ve gathered over the years the cover should reflect the mood of the story within. So, you would use your design skills to get people to feel the story.

For example, if two people were hugging on the cover romantically, there, the mood is romantic so the story must be, too. Or, if some princess is looking all regal on the cover, and maybe she’s looking somber or determined, that would tell the reader this might be a serious royalty fantasy story.

Despite there might be some moods that can be universally understood across many people, I think mood can be quite subjective sometimes. So, you do your best

I hope some of this helps! If you have any questions about what I said, feel free to ask 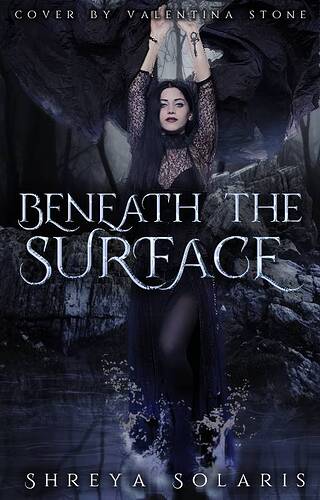 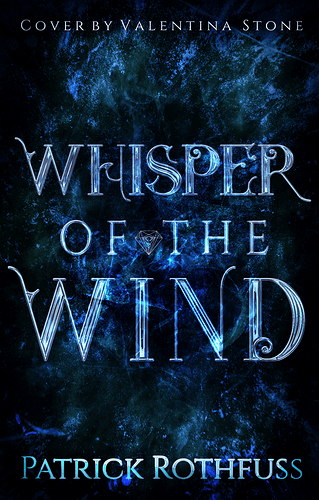 Both of these are not my best work–by far! And I think I could use a lot of improvement on these, but I just don’t know where to start.

MOOD: the first one is some… darkish fantasy that has some magic, but not much. The second is… I was trying to go for a windy feel. Of course I didn’t succeed. And WHY oh WHY did I think that making that title being so busy was good?

Whisper of the Wind

Alright, that’s all I’ve got

I hope this sparks something in you or helps you improve on the covers. These are just one person’s suggestions, so of course, go with your best judgement in the end. If you have any questions, feel free to ask away.

OOH yup! Thanks for all of that helpful stuff! I’m going in for a remake of Whisper of the Wind tomorrow, because idek what I’m trying to do with Beneath the Surface. Might revisit it when I have some ideas.
PS: That font is Star Black Inline

Another PS: that diamond… is my… watermark

Right now it kind of makes it look like it’s supposed to be part of the cover. Do you need the watermark if you already have “Cover by” on the top? I thought that was your watermark.

Yup! I just place it anywhere on the cover where it’s convenient…
And I just prefer using both for some reason… I usually do turn down the opaqeucity of both so they’re faded

I noticed the typo but I was too lazy to correct it!

Thanks a lot for this! Especially for explaining moods XD! It’s gonna be a B-I-G help!

I’ll try to improve the colours of the title and keep it in mind for future attempts!

Also, small thing, something about the shadowing on the lower bit of the girl’s right arm makes it look like she’s missing an arm.

This was really helpful! Thanks a lot for this opportunity!

This is what became of Whisper of the Wind. I quite like the simplistic design, tbh 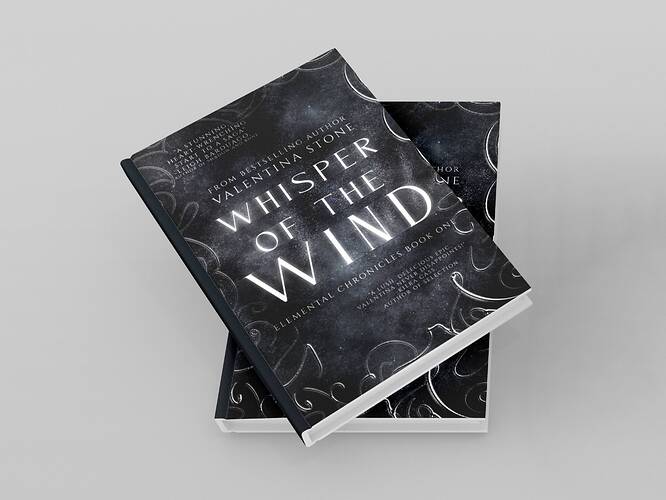 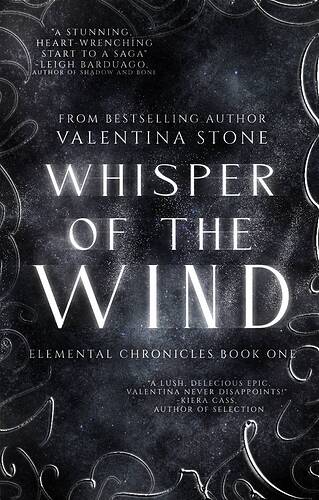 @TheTigerWriter What do you think?

Omg, that is SO BEAUTIFUL!

Pat yourself on the back, I can feel the wind. I can hear it whispering!

That “E” over there. It’s something that bothers me, personally, so I would fix it, but if it doesn’t bother you, you don’t have to change it