hi hello hi, it’s me, ya girl, jade! skinny penis been gone fr a bit and i’ve had a small itch for graphic designing? so i’ma try, mainly covers but maybe blends if the req is good?

rules/notes
- story must be posted for covers! don’t care how many chapters don’t ask lmfao literally just has to be posted
- looking at my examples u can tell i mostly do darker graphics… so yeah, might be super picky on light graphics
- i mainly do manip, can do simple tho it’s not my favorite, minimalistic is almost always a no, however i do list minimalistic examples and if you want something similar to those then i may be likely to consider
- blends can be gifs, but nothing too much, use ur best judgement/ask
- free, but explicit credit is a must
- password is a song recommendation! will ignore if you don’t put one!
- idm thread hopping but other parties must be ok with it too, and you gotta let me know (only applies for covers)
- be safe & well!

my own song recommendation to everyone is ‘villain’ by k/da evelynn & ‘runnin thru the 7th with my woadies’ by $uicideboy$! tysm for stopping by! :]

subtitle; a collection of descriptive pieces

colors/mood; some white space. Either lots of vibrant colors or barely any colors (like grayscale, but at one or two colors at most for emphasis). A chill and observant mood, a people-watching vibe

ideas/pics; I have three ideas in order of preference, but you can choose whatever you want. The first idea I have is one that’s similar to the first picture example. The second idea I have is a girl who’s writing in a busy café. If not a café, then a train station or a busy city. She’s the focus of the cover. The third idea is a blend of three different environments: European forest, rainy metropolis, and empty train station at night. Maybe have a girl or boy seemingly walk between those environments, but that’s totally optional.

anything else; Have you listened to Fake by Lauv and Conan Gray? It’s a bop. I also have entire playlists in my personal thread, including LoFi/Jazzhop playlists

Thank you for considering!

i’m not super keen on simple, i kinda just suck at it, but i might be able to do the first idea? but one question - in that, uh, smoke shape thing (idk what to call it lol) what would you want inside of it? those three blends you already mentioned or something else?

I think those three blends. Like trees, skyscrapers, trains, roads, and people

hihi, sorry for the delayed response, i was trying your cover but i couldn’t get anything i liked, i’m a hit or miss with simplistic and i didn’t want to give you something i wasn’t happy with ^^;; i wish you luck with your cover!!

title; No Blessed
subtitle; None
author; E.T Tekena
colors/mood; For the first idea, I imagine it’s reddish brown and for the second, I’m not quite sure. Dark colors are fine, nothing bright.
ideas/pics; I have two separate ideas. The first is an image of a man (full picture or bust), half of his body is pixelated/disintegrating while he just stares. Being him is a dome like tall building, which is also disintegrating and above them is a red sun. The second idea is a full length image of a man, and the cover is split vertically. In one half, he is wearing casual clothes, and two men and a woman stand beside him. In the other half, he is dressed in wizard fantasy type clothes and a man and a woman are at his side.
story link; https://my.w.tt/pyVAcOVnfbb
anything else; the first idea was inspired by this cover of Dune and the second was inspired by this and this
I’d love if you could use Ronald Epp when making the cover, since that’s how I visualize the MC but it’s not a must. Thank you!
Password: If you’re into Kpop, I highly recommend Fear by Seventeen or Can’t Stop Me by Twice. If not, Faith by the Weeknd is also awesome!

can’t stop me is

luv me some twice
i like the first idea, i really dig doing stuff like that (i updated my examples, ‘dead sun’ is kinda what you’re talking about and i loved making that) however can you give some photo examples of the building? also photos or links to ronald because uhhhh i… don’t think this is who you’re envisioning.,…??

I’ve had Can’t Stop Me on repeat all week

Dead Sun is kind of what I imagine the first idea to look like, and darker. When I spoke (wrote?) about the dome, I was thinking of something like this but I can’t seem to find any suitable irl pictures sigh The red moon will have to do then with a clearing behind the man.
I just realised I left out the ‘s’ out of Ronald Epps name, that is definitely not who I was going for

Here’s the image I initially had in mind
Also, please make the title font bold, maybe with a few swirls. In case you need it, the genre of the book is sci-fantasy.

that guy makes a LOT more sense LMFAO
i’ll give it a shot! i don’t like accepting outright incase things go badly but i will be trying it :] just a note if i do complete it it’d be tomorrow, am going to bed rn :>

Dang…I have everything except the actual story written down hehe…

title; When The Moon Rises

subtitle; The Asmodej, The Hermitic, The Alpha. (don’t need to write that, only if it suits the cover)
The prophecy behind the love triangle… (this line can be smaller than the other.)

colors/mood; red/dark or even greenish 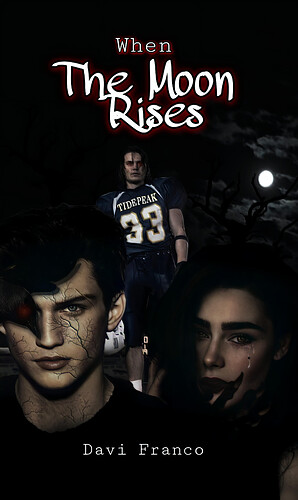 I use the faceapp App to make the appearance of my characters (mixing two people) and here is a link to the three characters I would like on the cover (Nicole, Johnathan and Kurtz)

Kurtz could be surfing or looking at them both jealously.

The idea would be a love triangle, as it is on the cover that I put up there. The weather could be reddish or even greenish, depending on what would match more!

anything else;
Thank you so much for doing this!

hopefully i’ll be open for a bit if you do though! :]

ahh, so sorry but this is a bit more crowded than i’m comfortable making! more than 2 models gets difficult for me since i already struggle with putting 2, my style leans towards one focal model

i wish you luck with your cover!

heyhey! how important is the domed building? like do you perhaps have a different idea or can go without it? because i’ve actually been searching for about two hours and haven’t found any good irl photos of a building like that i can use ^^;;

and unfortunately i can’t do your second idea, i’ve never been able to manipulate clothing;;;

Sorry I’m replying so late! I can do without the building, just the red sun is fine ^^

I’m thinking he should be in a forest clearing, maybe something like this but without the trees? I have a very vague image in my mind so if it looks better with the trees, I don’t mind them.

I have small question, what exactly are blends?