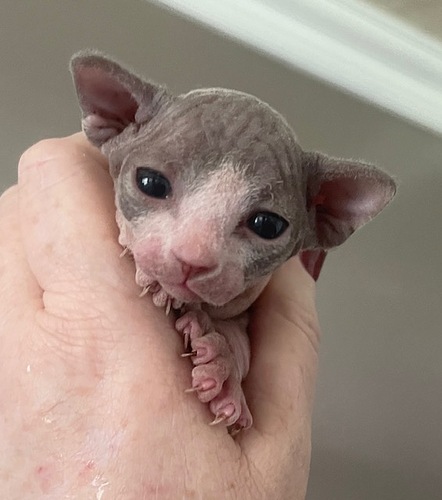 Awww!!! I remember when you posted another one of these babies and said you were looking for another! So cute! Are you interested in related names? Like something in relation to your other kitty?

Also, the gray skin and blue eyes makes me think of stormy skies, so I thought Storm off the bat

Yep! We have a 1 year old Sphynx as well named Castellia. I don’t necessarily want them to be related but I’d like them to flow well together. Like not sound clunky to say “Castellia and __” all the time.

I thought of Storm too but it doesn’t feel quite right so I tried to kinda jump off that and look at storm/weather-related names but nothing is quite striking me. I love the idea though if you have any I might not have thought of

Off to Google! XD I searched the other kitty’s name and see it’s a plant. Were you thinking of doing another plant?

I didn’t even think of that

but yeah I’d be down for a plant name

I searched weather first and found some!

Gray gatsby (I laughed when I saw the is one xD)

My first thought for a plant was Sprout

Seth, a variation of Set and the name of the first king of Israel.

Castellia and __” all the time.

edit: Callisto is a moon of Jupiter

Ooh Drizzle is cute, and I kinda like Winter too

Little rascal (as a nickname)

Thats all I got, I’m bad at names

I feel like an L name would be good with this. Like, Castellia and Luna/Lacey/Lumos or something.

If he’s anything like every other Sphynx kitten I’ve met little rascal would be fitting. We haven’t gotten to meet him yet but the breeder referred to our other cat’s litter as “the flying monkeys”

I could see an L name fitting him maybe

Ooh Drizzle is cute, and I kinda like Winter too

You can also play with spelling! Ask the kitty which names he likes and see what he responds to

His breeder wants to start getting him used to his name (which is what we did with Castellia and it worked great, by time we met her she was responding to it already) so we want to find something but it’s tough without having a good sense of his personality. I don’t know how we stumbled across Castellia and got lucky enough that it fit her perfectly lol

Oof! Yeah, that makes it harder! You could always do the failsafe, pick a name and if it doesn’t fit that’s now their unofficial middle name xD.

Yay for failsafe! XD I also looked at Castellia originally and immediately thought of Castello, Castle, Kingdom, Knight, and Treasure before I knew what it meant. These don’t go with the theme you said, but they’re a few more names. You also prob want to pick something that flows off the tongue. so when he misbehaves you can quickly yell his name.

Aww, precious baby. Since he is a Sphinx, I think Egyptian name would be cool, like Anubis, Aten, Horus, Neper, Geb, Shu or names of the landmarks, like Nile or Memphis, Waset… or Duat. Or a kingly name like Ramses…

But since the cat who owns me is named Marshmallow, I doubt I am a great namer of cats.