I found something a bit interesting and thought about sharing.

I understand it has a watermark that reads “ifunny” on it, but ignore that and look at the bigger picture and lend me your thoughts.

Here is the picture: 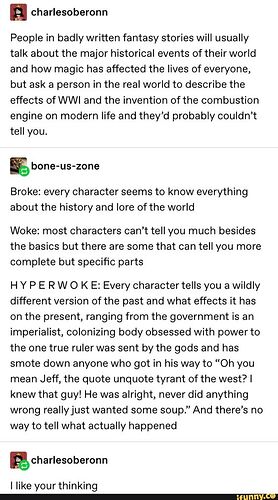 What are your thoughts on this? Tell me, what do you think?
I am curious!

A tumblr post on writing is more meme than advice

Interesting.
Let’s talk about the crappiness of it shall we?

Cool that you think that.
Now, I am even more curious about the comments of everyone else.

It’s fair to say that occassionally information is distrubted by the wrong sources. If it’s a middle-ages styled fantasy story, they do have a point in saying most people won’t know about the smaller details of war. Afterall, even in modern times all that information comes out later on. Why would an inn-keeper know about it?

But it is worth mentioning that, for the most part, I don’t think this occurs as often as this post is infering. For one, characters who are taking part in war/political machinations will probably be talking to others who are often involved in those things, therefore the information is broader and relayed by “experts”, aka the inventors of said WWII machines and weapons (using the example of the post).

So, it’s something to keep in mind. Would this character know this?

Do agree with RussianBot tho. Not all tumblr posts about writing are bad, but for the most part they’re meme worthy. Though, they can generate thoughtful discussions. It’s always wise to reflect, but I’d say to take advice from them with a grain of salt.

For one, characters who are taking part in war/political machinations will probably be talking to others who are often involved in those things, therefore the information is broader and relayed by “experts”, aka the inventors of said WWII machines and weapons (using the example of the post).

I know there’s an old joke that military intelligence is an oxymoron, but if a large organization sucks that much at communication, it deserves to be wiped off the map.

The first one talking about how the historical events affected everything is really true. Unless you’re dealing with an historian or some history teacher, asking anyone on the fly won’t really know or can’t tell you how or why a specific event evolved technologies and people. This is why, in my own stories, I avoid talking about how the character sees the world and how it affects people and the things that’s happened that has also affected them. I just talk about how they see the world period, and what’s going on currently. I may add in a few things from the past, like how there were multiple wars and it added to a continental shift, but I don’t talk about how that affected people thousands of years ago or now. I may talk about how there’s multiple species on Earth, but I don’t talk about how their arrival or inclusion affects people since they’ve been around for hundreds to thousands of years. My character doesn’t know how someone’s life was impacted because of the government or because of some major enemy. He knows how it could’ve impacted them, but not personally. Not unless it was to himself that it happened to.

On the second line, the one that says “broke” lol, that adds onto what I’ve previously said. My MC doesn’t know everything. He’s heard of things happening which, in some cases, are huge things like the continental shift and the alien species that came to Earth to hide from the intergalactic war, but he doesn’t know where they reside, he doesn’t know what caused the wars, etc. all of which are things I don’t talk about.

As for the “hyperwoke” comment, I really like that thinking. Though, realistically, depending on person or event you’re talking about, there could be only one version. In some cases, multiple stories may be accurate because people remember things differently or, like the example, they knew them personally. Maybe Adolf Hitler had a sweet spot for his wife and she had the same ideologies as him so she probably didn’t think he was a bad person. I don’t know. But in all actuality, there is usually one story to tell of said event. However, there are multiple experiences to that event. For example, the Titanic. One event happened. We all know it—ship sinks and 1,500 die. But every single person experiencing that traumatic event can only give you one version of it going down, and that’s the event itself. But they all have various stories that surrounds that event. One person was in their room, another on the balcony, another working on the bridge, etc. One person died, the other lived. Their stories will line up as one, but their experiences will differ.

Fr, even though information was slow to spread, there were many ways to keep an organization informed on the newest happenings. Like you’d say, I’d be very unimpressed with a military aligned organization that doesn’t at least have a grasp on the political or innerworkings of certain groups.

Moreover, I think it would depend on the impact, timing, and perception it left on the world.

An example would be COVID, or even 9/11. Both of which left a HUGE impact on the world. You ask a random dude on the street “what can you tell me about 9/11” and he’ll know what it is.

I think the most important thing to do is to consider who the person is relying the information. The impact a middle eastern person felt by 9/11 is going to look a lot differently compared to how a white person felt.

If it’s a recent war in the middle ages of a fantasy war, and say this battle was notible for it’s bloodshed and brutality–many will know about it. But the way a commonor perceives it will be different from how the upper nobility perceive it. Same with the soldiers.

It’s important to consider these things when using someone as a talking point to reveal things. In stories, it can be used to tactfully reveal themes/lessons, information, motivation, it could be used to minipulate audiences, characters, etc.

This is a reason that I have an Immortal… Knowledge of many years, though mixed with age and forgetfulness, he knows much of the world and it’s histories, but not all…

I have the weirdest “immortals” in my story.

Well, to be fair only three races are completely immortal while the rest have extended lifespans. So, it isn’t too weird to be honest.

I love it. But anyway, you got me thinking a bit.
I should really focus on a Time Abyss Character for a main in one of my three novels.

he knows much of the world and it’s histories, but not all…

That makes sense unless he was completely all-knowing or something.

Yeah, I have three main races, with sub-races of two.

Elves. who’s lives are without end unless mortally wounded… There are two kindred’s The Elves of Ralloth, a coastal town/city (not chosen how large to make this yet), and the island Ralloth Mul, and the Winter Elves of Kel. Known as The Drake Herders. (They were destroyed long ago by the Dragon’s, and now only one remains). Yet it is said that there are still pure bloodlines within Olban, yet none have met any (For reasons I will not disclose yet)…

Men. Men have short standard lives, some eighty years or so, with some reaching one hundred and beyond. Yet, the Men of Olban and Acoss have long lives. Some have lived for thousands of years, and this is due to the mingling of races. Many long years ago the Elves of Ralloth did trade with Olban, and as such some removed there and the bloodlines became mixed through love.

Dwarves. They have been known to live for some five thousand years or more, but their is no record of any reaching six thousand years of age. They average between three and four thousand five hundred years.

And the Immortals. There are a few, but apart from Geldrid, I cannot disclose the others at this time… They cannot bestow their immortality upon their offspring, and as such they will fade in time. Again, they can be killed if mortally wounded like the Elves, but none have succumbed to this fate yet…