Look at her with her cute little knife all ready to stab people!

lol, I had to come back and laugh at this again XD

Everyone. I updated the shop. I will draw ANYTHING (except monkeys). Literally ANY NON-HUMAN CHARACTER (except monkeys…did I already say that?) But that is with limitations. No realistic things. No background. And you will be getting your character in my style.

Also, did I mention I won’t draw monkeys?

Other than that, yeah, you get free character art IN COLOR. Isn’t that pretty good? I’ve seen artists charge a lot (I know they need to make money) but I think it’s nice to get art for free. The only reason it’s free is because I do this for fun. Win-win.

In all seriousness…this is just really fun.

@NotARussianBot Oviraptor, tapir, and musk deer with antlers all in one drawing coming up

I just had a sudden whiff of inspiration blow my way. Keep your eyes out for the finished thing.

@NotARussianBot Three birds with one stone.

The musk deer with antlers is playing ball with the tapir. The huge oviraptor with feathery feather arms is too shy to ask to join. Really happy with this. 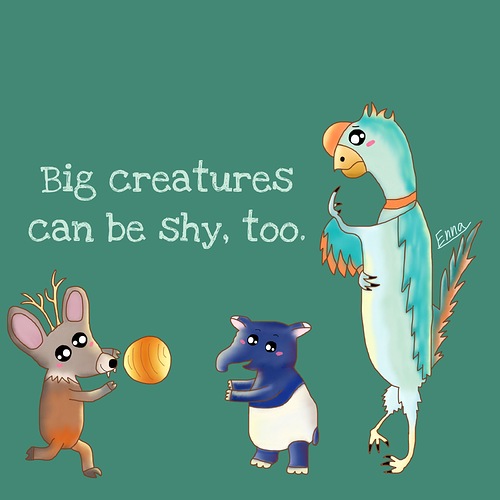 I added text later because my digital handwriting is bad.

Oh yes, one more thing. The ball is a glowing magical ball.

You’re giving me some good practice!

I took a chance this time.

I didn’t look at how other people would draw these creatures. I usually look at the real animal and then at illustrations that other people have done to figure out how to draw them.

This time though, I just looked at the real pictures (or the 3d model in the case of the oviraptor) and interpreted them in my own way

I was so, so tempted to make the tapir’s white part into either a diaper or pants XD But I didn’t.

A tako with a taco on the head?

I’m not that good at drawing food, actually. I could try though. I’ve drawn a purrito.

Or just eating a bunch of tacos