Instagram users here? Is this happening to anyone else?

Hey there. So i joined instagram 3.5 years ago and since then have been using it a ton since I’m self published. For the past 2 weeks, and last 8 or 9 posts, my engagement has plummeted. Like to nearly zero likes.

I made a post on my IG stories asking if people have been seeing my posts and most said theyve hardly seen anything, and others messaged me to say their feed has been really messed up and they don’t see anyone they follow anymore.

Now, it wouldnt bother me all that much if i wasnt my own business trying to sell my books and whatnot. And Ive even began making some reels to try to stay in the loop but nothing has helped. On the bright side, my IG story engagement has increased.

Any else know why this is happening, or is this happening to you at all? Have you been losing engagement, or have you been hardly seeing anyone you follow? I feel like im literally going crazy and since ive been planning for a cover reveal for a while (and just did it today), its been stressful dealing with this. I need answers.

I don’t use Instagram to post my books, I use it for personal stuff. But now, I don’t even use Instagram anymore because they changed the feed SO much. Every time I’m on, I only get suggested pages that I don’t know. I barely see people I follow anymore. It’s been like that for a long while now. People on twitter have been complaining about it, too.

The thing that sucks is there not really anywhere else for me to go. Facebook is dead. I refuse to join twitter. Ive been posting kn tik tok but i feel like i have to really be meaningful with what i post there, and instagram is where ive been able ti talk about porjects, do cover reveals, and so forth. And now its like i cant.

I’ve personally not had this problem. Maybe it’s because I post every day and engage every day? Idk. Or maybe I am having this problem, but I’ve always had lower engagement, so I don’t notice and even if it was the case, it doesn’t particularly concern me. But I’ve definitely heard others having problems like what you described.

I’ve seen quite a few accounts complain about this in their stories. I don’t really use social media much, mostly to post my own stuff and then peace out, but it’s always pictures of my kid. I think this was part of the new update they just did so lots of people are not happy about it. I haven’t personally seen it because usually when I post on Instagram, I’m posting to my story, watching my stories, watching reels, or posting an actual post to my feed. I never really just scroll through my news feed. I’m a very self-absorbed social media user so I don’t normally view other peoples content, I just have it as a place to post my content haha.

The weird thing is ive also been posting almost everyday. I engage a lot on people accounts, too, and try to. My engagement wasnt the best, i only would get like 7 or 8 likes before and maybe 1 comment but now im fighting to get even 1 like. Even my own best friend hasnt been seeing my posts. I dont understand it. Or how to fix it.

Maybe one thing you can do is tag your friends in your posts?

There was a time when an account I was following was only getting a few likes compare to the 20s or 30s before and they said they were being shadow banned or they had been put into Insta jail for reporting too many accounts (they were reporting spam accounts which makes it unfair for IG to punish the reporter).

If you ever did a follow train recently and had “follow” in your caption, I heard you could get sent to Insta jail, too.

So, for whatever reason, it could be Insta jail. Usually those pass after some time though.

I’ve experienced this on Twitter, not the engagement, I never had much to start with

, I mean my feed. I rarely ever see the people I follow. I hate it. I even tried to adjust the settings but it doesn’t help.

On Instagram, actually, I do see the accounts I follow. It’s worth pointing out that I don’t follow many accounts so that could have an impact.

Honestly, I see a lot more activity on my own blog than social media, even when I update only once a month. I’d rather spend my efforts working on that.

I never really just scroll through my news feed. I’m a very self-absorbed social media user so I don’t normally view other peoples content, I just have it as a place to post my content haha.

I also rarely go through my feed but rather, I binge on something specific. When an account sparks my interest, I check them out and scroll through their content.
Or I’ll binge on tags. For example, I’ll post a picture of a bird, tag it and then I’ll check out the tag to see what birds other people posted.

For me, Instagram is not a social media. It’s a pretty picture/video repository.

Insta (and Facebook) recently changed their algo with a STRONG preferance for reels (to the point of absolutely destroying engagement and reach for anything that is a static image). Honestly, our great Facebook overlords are telling us we need to move to video content, which kinda sucks for people who don’t like it

Just as an aside, Insta recently sent out an e-mail to creators regarding Reels content. They’re really, really pushing it. Amazon is also pushing it, but not as much as Facebook. 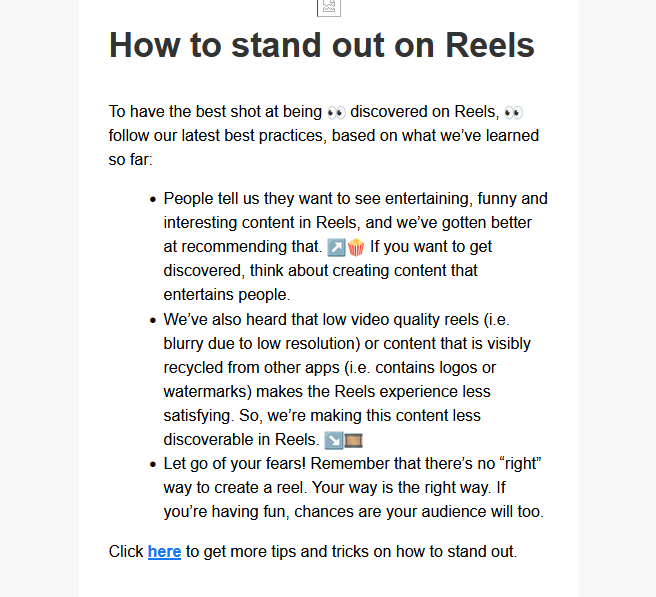 Shoot. But thanks for the screenshot.
Clearly, every app wants TikTok’s success.

I could try to make short vids in canvas just from stills. But that makes the creative/promoting process even harder. Sigh.

Yep, it’s bad for a lot of people at the moment. It used to be that video was King for paid ads, but they’ve pushed it for unpaid posts now, too. If you want people to see your posts… it has to be video, especially Reels.

A good way to try and boost your engagement and reach with video, without having to learn mograph or 3D animation is just a static mock-up with moving elements. I’ll be making a quick tutorial over on my website and for YouTube, but I’ll share it here, too.

This is an animated mock-up I did recently, stuff like this works well because there’s minimal text - which is what FB requires for ads.

Oooh. I love the fire part.

An advice someone working in social media (for a job) gave me was to utilize memes. It makes so much sense. I love memes. Why don’t I use them more?

Memes are good, but remember if they’re static - don’t bother at the moment

Even just adding some animated stickers or something can really give you a good foot in the door. And obviously remembering all the basics, utilising same-day schedules for Stories, making sure you use every part of IG etc etc etc… it’s just a shame that a lot of folks have spent so long learning how to make standard graphics, only for Zuckerburg to say “nope”

Ugh this is frustrating.

I guess i now have to make my static posts into reels somehow. So much for cover reveals and whatnot. Guess i need to get into the reel game somehow.

A good way to try and boost your engagement and reach with video, without having to learn mograph or 3D animation is just a static mock-up with moving elements. I’ll be making a quick tutorial over on my website and for YouTube, but I’ll share it here, too.

omg really? My friend you are such a lifesaver. I will gladly do this. I will also gladly watch your tutorial. Assuming you can do it in PS or something adobe does? Or slmething i hopefully already have and pay for.

it’s just a shame that a lot of folks have spent so long learning how to make standard graphics, only for Zuckerburg to say “nope”

Literally this! I finally was beginning to master the posting.

with photos. And themes. And now i have to change it all again.

So much for cover reveals and whatnot.

Cover reveals can still very much be done! The ones I make/sell are a little more complex, but there’s plenty of alternative ways to offer reveals in video format!

Assuming you can do it in PS or something adobe does? Or slmething i hopefully already have and pay for.

Yes, they can be done in PS, but I prefer using software such as Premiere Pro or After Effects, as they’re made for video editing. I’ll cover the basics, and hopefully help a few folks out.