Just had an interesting thought!

I don’t do this type of writing and if my memory serves me, I most likely did this years ago. However, I wanted try something a little bit different.

The thought is why don’t I make my novel into play format for my rough draft.

I know, I know what you are thinking! Why do it like that and give yourself more work?
Seriously, what is the harm in trying something new-ish in the hopes of seeing what works best for me?

So, for my rough draft it will be in play format then I will turn it into a novel format. I will be scouring the internet for help on how to make it work.

That is the interesting thought.
Any comments are welcomed.

It’s not exactly play-writing per-say, but I’ve read that there’s a technique a lot of people use in rough draft’s where they’ll write out all of the dialogue (and basic action scenes between) and then fill in the blanks. It works pretty well for a lot of people, I’d say. And maybe is a little less technical than playwriting. But, like you said, if it works best for you then do it! Everyone has a mad genius streak.

I’ve read that there’s a technique a lot of people use in rough draft’s where they’ll write out all of the dialogue (and basic action scenes between) and then fill in the blanks.

Interesting. I wish there was a way you could show me.
Far as a picture or something.

I wrote up a rough example of what it would look like. Bear in mind that I rarely use this formatting to write wit, so it may not be 100% correct. This is more a piece of advice I was given when I was having a hard time getting through a rough scene. 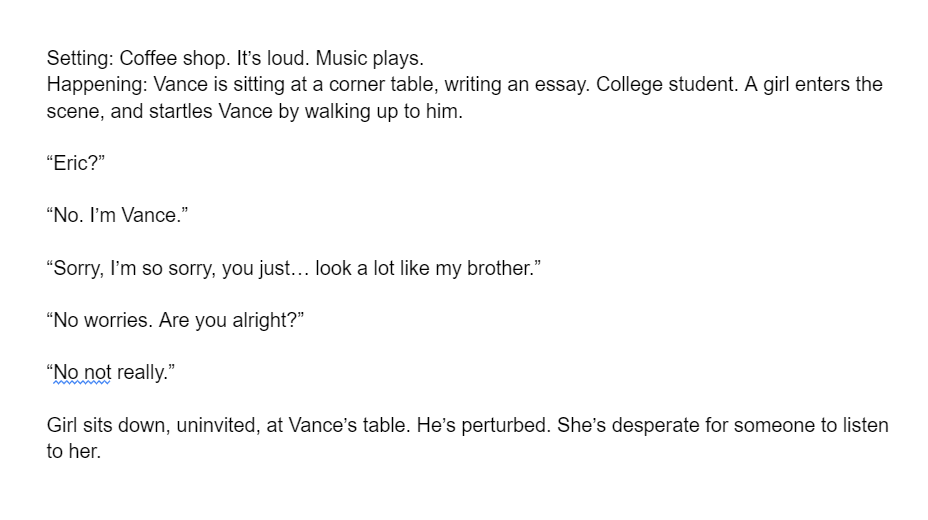 Basically, you just write out the important details you’ll need to know when you go back to re-write. The setting, what’s going on, the mood, or even a character’s feelings towards another could be important to include. Mostly it’s a scene-by-scene thing as well, meaning you kind of have to take it slow.

That is pretty cool.

I was going to try it like this and note that this is merely an example of how I would try it.

Scene: Walking in a local park, Barry and Janet conversate with each other as they take their nice stroll.

Barry: Hey, do you remember when we used to do this years ago?

(Janet ponders the thought then exhales a laugh)

Janet: Yeah, I remember it well. Quit acting like that Barry! You sound like some old man.

Barry: I am an old man last I remembered.

Janet: Nah, I like to think we are forever young. Both at heart and in spirit.

(Barry says nothing but smiles)

Barry: Being forever young with you doesn’t sound bad.

I like your way a lot, too! It adds more description of the emotions each character feels throughout the conversation, which may better help you fill in the rest of it when the final draft comes.

this is literally how i outline my books haha

I guess it’s just a you do you situation. Everyone has different ways of outlining and writing stories, so feel free to experiment with your process!

Mhm! What I typically do when I have new characters is write out just dialogue between characters and make sure I can tell, even without dialogue tags, who is saying what. Most people have distinct kinds of tone and jokes and sarcasm they use, which I want to be reflected in my characters. I never want my readers to not know who would be talking, regardless of tone tags (to an extent of course. Things will always overlap.)