As we know, our dearest Luca has been arrested by Ms Librarian on…basically no grounds. They believed in us about Raza, and the cruel Librarian dragged them to confinement. How suspicious.

I believe I speak for all students and especially Jordania when I say this:

Luca was nice. I don’t see what they did to warrant arrest

WE NEED OUR HEAD STUDENT BACK, YOU OLD HAG!

Ms. Librarian had no proof that Luca was guilty of the tragic death of Sadria, making us communicate with Raza, or anything in between. Luca was an open-minded, rule-abiding citizen that should not be accused of crimes they didn’t commit. Without evidence, you shouldn’t have used a knockout spell, threatened your own apprentice, and taken Luca away.

What I’m trying to say is, this isn’t fair. Luca doesn’t deserve this. They should be released because there’s no evidence against them.

I wonder if I should tag the bookworm

I am here. Protesting. Just at a distance.

It helps, Jordania. Wouldn’t want you to get in trouble.

Thank you for joining us 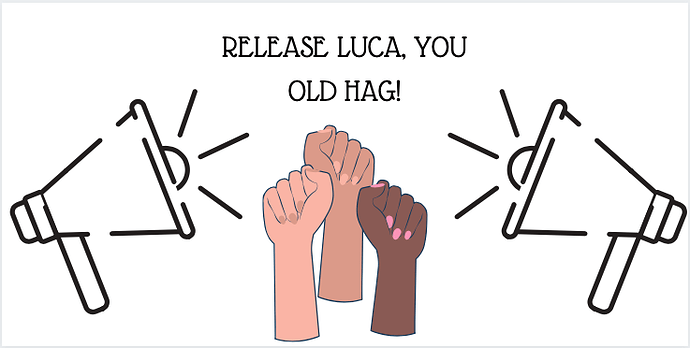