Roleplay As Your Character! New players are always accepted!

Your character has randomly been teleported to Ellstryle! Role playing as your character, figure out the riddles, clues and problems to escape and go back to your dimension.

Hello and welcome, I’m Seci and I’ll be your host for Roleplay As Your Character! This is a game where you… well, it’s basically the title. You can choose one of your book characters to roleplay and go through this game kinda like the Epic Battle Game, but it’s gonna be a little bit more interactive. First, before you actually start the game you need to know about the continent your character has randomly teleported to and get background knowledge. (You don’t want to be confused when playing, do you?)

You can join even after or before a Scenario ends! We’re always accepting new people!

A brief overview: Ellstryle (Pronounced el-strul) is a continent smack in the middle of the Atlantic Ocean (for more context, between The United States and Europe). It only has two countries which is Rudamann and Beodland.

A brief overview: The Human Government is basically what it means, is a government run by humans in Rudamann. The Fae monarchy is basically how a normal monarchy would work, the King makes all the rules (with the guidance of the Star Seer).

A brief overview: The Fae and Nymph can simply be explained as ‘elf-like creatures’ with their pointed ears and Lithe bodies. They are merely cousins with some distinct features that sets them apart. The both have magikal abilities (although Nymphs are far weaker), heightened senses and long lives that make them superior to humans.

A brief overview: SHARP- Society of Honed Assassins for Regulation and Precision (all you need to know;)

A brief overview: Only Fae’s Nymphs and part Fae/Nymphs are capable of using magik. There are 4 common elements, Air (Caeli), Earth (Terra), Fire (Ignis) and Water (Aqua). All Fae’s and Nymphs are born with two elements (one is stronger than the other) and they pass their strongest elements to their future kids. There are also Omnis’s (which are super duper rare) that control all the elements. How did the Fae and Nymphs get their magik and long lives? The flower Craenyme, which also gives them their 200 year life span (these formed after centuries of eating the flower)

If your character has any magical abilities or are enhanced in any way, it doesn’t exist anymore. You’ll be picking which species your characters would be. When starting out as a Fae or Nymph, you cannot use magik (remember, your character just got here). You’ll soon start to master your powers at SHARP. When roleplay it as your character, use italics or a different font color. If you are choosing ‘human’ you can choose a magikal weapon. (You will also receive an Ellstryle ID Card)

If you would like to help, privately message me:)

Holo-cell, cutting edge technology. Mostly used by wealthy citizens and military personnel, small chips that can be synced to your brains and measure their signals. The chip is inserted into your wrist and can display a screen. Like a hologram, a specific light capable of taking advantage of molecules and can present a screen. You can search anything up with just a thought and the chip can be turned into a bracelet or any other object to fit your needs.

A way of referring to a teacher instead of using Mr, Mrs, etc. and doesn’t need a surname. Forelaerend or Fore’ is a male teacher pronoun, much like a Mr, it is said before a teacher’s name. For example, Fore’ Steelian would mean Teacher Steelian, using the whole word to refer to a group of male teachers. There is lareow or La’, a female pronoun, and Laedore, a non-gender pronoun referring to both male and female teachers.

Are Nymphs that serve the Royal Fae family and prophesize the future. They are not able to speak and have their tongues cut out when they become a Star Seer.

@Seci_Min as Carmen
Current status: A Novice of SHARP

@NotARussianBot as Inky
Current status: enjoying the stay at SHARP

@AlteruneSC as Hound
Current status: Highly suspicious of everything

@lst-my-shp-sil as Aviana
Current status: working on her magik

@shrumplings as Maple
Current status: in her dorm room

Scenario One has Ended

One day, while your character is doing… whatever they’re usually doing, suddenly… poof! They land in a grassy field in the middle of nowhere, You soon find other characters and agree to find civilization. After walking for what seems like years, you guys finally come across a city and see a sign that indicates that you’re in a strange country called ‘Rudamann’. What do you do?

Click on Explore Ellstryle! to explore the city and interact with NPC’s or ask the Narrator (Seci) for clues and tips;) 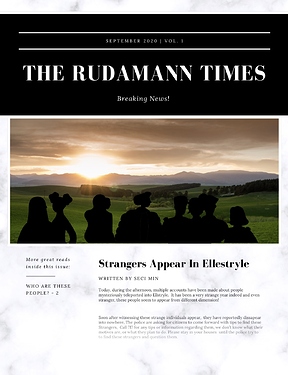 Please try to make decisions as a whole group so the game doesn’t get messy, there are some individual stuff but for right now, please explore as a group:)

Type > enter ‘place’ to be able to go inside

Options - Available people (on the street):

@Seci_Min Narrates the story and actions~

Played by Seci, a Novice at SHARP

Carmen’s friend/Squadmate and a Novice at SHARP

Carmen’s friend/squadmate and a Novice at SHARP

Carmen’s friend/squadmate and a Novice at SHARP

Carmen’s friend, Naeva’s girlfriend and a Novice at SHARP

It’s in the name

I’ve got a bad-tempered ghost-demon thing bound to an amulet. Is he allowed here?

Well, he might need to take a physical form

[spoiler] Why he need a physical form?[/spoiler]

Because… demons don’t exist in Ellstryle, and you’ll be picking if you want your character to be a Human (which is lame), a Fae or a Nymph

Its so complicated to do this on an iPad too:(

Can he possess a faery or nymph?