So, help me understand something, because I got nothing!

When you see these titles, what is the first thing you think about far what is the overall story is about?

I’ll take anything that isn’t too stupid (sorry if that sounds rude or something).

What do you think? I know about the genre of this story, I am more concern about what your random ideas are on what the story is about.

I am going to play around with this some more until something slaps me in the face so hard that I get a serious reality check and bounce back.

Seems like a dark epic fantasy, but not a single cohesive story—more like a bunch of small stories set in the same world, with each chapter being a different character’s title

Interesting. I was going somewhere down that path, but I can’t figure out the overall story in all honesty.

I am loss and can’t find a way to figure things out.

Also, I try to stay away from pure fantasy that involves strictly swords, magic, horses, and with little to no modern technology.

Now, that might change in some way or form.
I am weighing my options.

Each chapter seems like it could be its own prompt/story tbh, under like a single theme and world

True, true!
I am just stuck a bit on what I want to do. I’d feel terrible if I asked for some serious help when it is more of a me-figuring-things-out-type deal.

First impression: oh, these all look like book titles rather than chapter titles…but who am I to judge what’s an acceptable chapter title when I’ve got a chapter that’s “When Smokish Fog is Cannoned” and just outlandish things like that?

Nope, those are fine chapter titles.

Second impression: Sounds like some royalty-based dark fantasy that is probably quite grim and dark and there’s probably a LOT of fighting and conniving characters and I bet a lot of people die all over the place. There’s probably a lot of giant battles…makes me think of LOTR. Not the books, the movies because that’s all I know. EPIC wars. I don’t think the characters are going to get a break. They’re just going to be on the move constantly until the very end.

Third impression: This is a story that starts off in a nice, quaint, small town, but ends in a giant battle field littered with dead bodies and bloody swords with the main character face to face with the biggest trial of their entire life. Readers will be exhausted by the end of this in a good way.

Hope this helps in some way?

Pondering and weighing my options!

I think dark fantasy is right. I disagree with them not sounding like “chapter” titles. I’ve read books where chapter titles are so random like cotton and orange juice, and the only pattern was blah and blah. That’s it. Seemed unrelated to the actual story as far as I could tell. Kind of like how “Bleach” the anime is called that, and like… why?

The titles do sound episodic. Like each chapter has “meat” to it, and they’re not short chapters.

In all my years of writing, I’ve never written a pure fantasy story where there were swords, sorcery, and the setting is medieval times-ish.

Normally, I try to stay with science-fantasy because it is the collaboration of modern/futuristic tech and magical wonder.

I disagree with them not sounding like “chapter” titles. I’ve read books where chapter titles are so random like cotton and orange juice, and the only pattern was blah and blah.

If my memory serves me, those chapter titles were meant to be about a certain character who was given that title for some reason.

I remember years ago some random person stated that one of the reasons why the anime/manga is called that is because the soul reapers cleanse souls or something along those lines.

I’ve redid the overall thing for The Breakers Series.
I am pretty damn crazy for going through with this. LOL!

I don’t care, because this story is for my eyes only until I decide to expose this beauty to the world…some day soon before I am old and gray.

Here is the newly done version:
[And by god is it lengthy!] 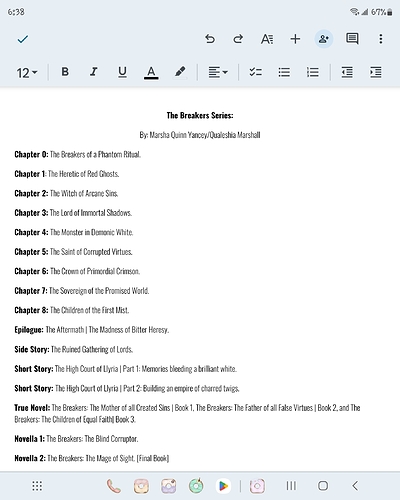