Take a bit of your writing and enter it in the text box @ InferKit and it will write more. Post your results below. I swear it’s so fun and you get wild results.

The results are insane

“Kariss, that was so dumb. Are you trying to become the goddess of dumbfucks?!” she yelled in frustration. “How could you do that?! How could you make a choice like that and not even stop to think about the consequences?!”

Kariss turned to face the others, her gaze hard. She glared at them, gaze dropping from them to the star she still held. In one hand, she held a circular stone with the white rune in it; in the other hand, she gripped a bolt and threw it. It hit the stone and bounced it into the water. The stone dissolved, and the star was revealed in its place.

“Now,” she said simply, her hand still resting on the gem, “let us go. I am going to die and I don’t want my actions to mean anything.”

She turned and began to walk away, only to stop in her tracks and turn back. The portal was now black and blue with stars being sucked into it. The gem inside the portal, the one used to open and close the portal, was glowing brightly. It was, clearly, absorbing the star’s power.

“Kariss, please,” Mayona whispered. “Just try to keep the portal open for a few more minutes. Just…don’t let the star consume you. Just live for us.”

“I love you,” Kariss said to her, her eyes suddenly filled with tears, “and I won’t let the star kill you. I can’t.”

Yeah, I have the first sentence sitting on my phone with no idea what I was going to do with it. This looks like some “needs a severe edit drama”.

Ink is attempting—with very little success—to shove Poppy out of the bedroom window so they can fall onto the lower roof down below, where Ink’s had an old mattress laid out for years, cloaked under a thick layer of her illusion magic. Unfortunately for Ink, though, the window’s not all that big, and cutting out the screen still leaves behind sharp bits of wire that are really quite good at tearing skin to ribbons.

I wish I could do something to help them. I mean, you wouldn’t think you’d need magic to do that, would you?

The contractions are constant now, each one causing me to fight against the gripping numbness as though trying to use my powers to close them. The things we do for love, I guess.

The house is full of tiny, incessant voices.

I look at the door to Ink’s room for a moment.

The window I’m stuck in seems so far away. I wish I had some power to close it, maybe just this once.

There’s just something about the innocence of it that makes me uncomfortable.

What the fuck?! LMAO!

Here’s a weird one. 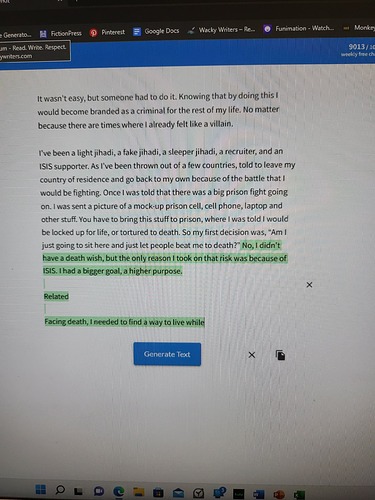 Sorry for the blur.

I put in the most recent part of the story I was writing in almost drabbles, and it turned my main character into a sugar addict with a problem

I mean it’s an interesting direction for the story to go, just not quite like that? XD

the whole thing is a bit long

here’s one line it gave me I liked:

one problem: the MC lives in the basement

This is fucking killing me

How did you find my dreams?!

I had to do this in two parts because I have no idea how to make it small enough to fit it in one: 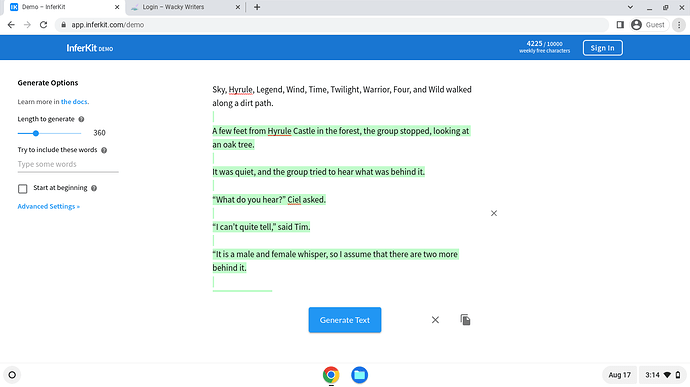 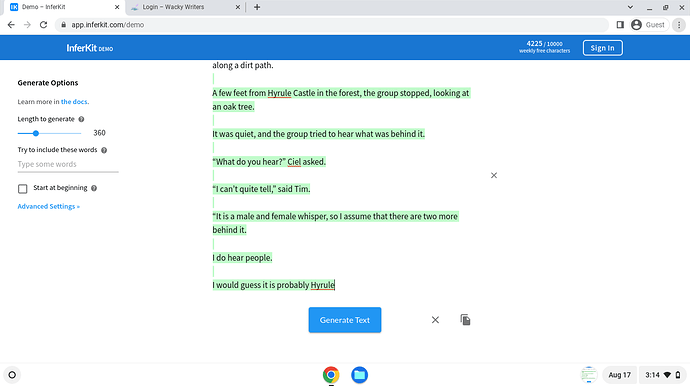 Domingo was a gangster.

His family was originally from Matanzas, Cuba.

When the rebel Castro family took power, his family fled to Venezuela, and eventually he ended up in America, in New York City.

He grew up in Harlem, New York and was orphaned at age 6. He was raised by his single mother and siblings. He spent four years in college and taught English in Nigeria before getting a job teaching Shakespeare at the Rasputin Rifle Society.

If you will remember, this is the company which makes the protective nose bags for the. 50 caliber weapons used by the .30 - 06 rifles of the infantry, the same weapons that the storm troopers used in attack of the Boners.

That is about as bad as the dying long after a quadruple mastectomy in speech class : had to write our obits. My poor partner stumbled through this and fussed me for the whole damn thing. Hers was far easier to read.

That is about as bad as the dying long after a quadruple mastectomy in speech class : had to write our obits. My poor partner stumbled through this and fussed me for the whole damn thing. Hers was far easier to read.