I thought to make a thread to discuss my favorite anime, Overlord. 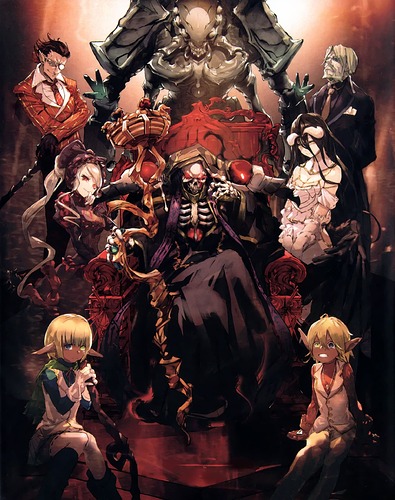 If you wish to watch a light-hearted story about a bunch of teenagers fighting evil, look elsewhere.

Even if you aren’t an “anime person”, I would recommend it, because it’s not a “normal” anime. Far from it.

So what’s it about?

It’s about a normal, lonely man who logs in just before the game serve to his favorite VR MMO shuts down and he gets stuck inside his avatar. Finding himself in a new world with unimaginable power, he decides to take it over with the help of the now sentient NPCs. If you are wondering, he’s the creepy skeleton with the glowing red eyes.

So far, there is no sign he will be able to get out.

The episodes often make me cackle when it gets to the “romance”.

The humor really works, twisted as it may be. I really find Albedo entertaining.

I’ve actually considered reading the light novel version of this in the past. “Considered” as in I actually took the first book from the shelf and wandered around the bookstore for an hour before putting it back.

But right now, my TBR is too horrifying to add anything more.

*cough * I mean my Japanese TBR. I still have an entire series of translated-to-Japanese French novels to get through.

I didn’t know it was popular elsewhere until you started bringing it up.

You aren’t going to trip over fanart like in My Hero Academia, and it’s very niche concept, but it seems to have a strong fanbase.

I’m surprised that MORE people aren’t talking about it, it has excellent characters, worldbuilding, themes, and very engaging story arcs. Pretty much everything it does, it does well.

I’m more unfamiliar with My Hero. I’d seen the manga title around, but there were other manga extremely popular so it was overshadowed. It’s weird. I know it’s been around for a while. Was it recently dubbed or translated or something? I hear so many talking about it now.

Not recently, but it’s big in the states. Like…BIG. I can find a million people with a Deku pfp on tik tok and twitter.

Are the Overlord light novels translated?

Yes. I have seen the first book in English in bookstores before.

You have a favorite character?

From Overlord? I’d say it’s a toss up between Albedo and Ains. I like them separately, not as a ship, though.

And have you or would you read the book?

Ains is the closest character to Umbrum I have ever read, going from really chill and relatable dude to absolutely terrifying. I also think it’s interesting how a lot of undead in this world have a surpressor on feeling strong emotions, so the moments where he actually loses his cool are rare and very memorable. Mostly I like how he analyzes the situation and doesn’t get frustrated when things don’t work.

Albedo is proof that the Amber Heard Effect is real in both real life and fiction: the hotter a woman is, the crazier she is. As Ains’ right-hand woman, she is the head guardian and manager of Nazarick with a tactical mind that few can match.

And have you or would you read the book?

I’ve read up to the part where they meet dwarves.

The wiki calls Ains a hoarder, stingy, and repressed emotionally.

The worst part is that all of it is true.