I was contacted by them on IG claiming that a reader of mine on Wattpad recommended me to them. I’ve been contacted by them before, either on IG or Wattpad, but brushed it away as scam. But am I brushing it away too soon? Maybe not for me, but is this good for some people? Have you used it?

So, whether or not this is scam, I probably won’t be using Webnovel. I just want to know what you guys think.

I looked into it earlier.

An overall feeling that I got? (disclaimer: this isn’t a fact but my deduction, take it however you want)
Webnovel promises to pay for your writing as long as you deliver the agreed upon amount of words weekly. Yeah, but to get picked up on their paid program, you need to first publish for free and climb the ranks to get noticed.

But let’s say, you hit a jackpot and you sign a contract with them. But when the contract runs out and you keep writing as promised but your book goes down in the ranks, they don’t have to renew it. And your writing becomes free again. All that effort invested into their platform and you get screwed.

Nah. I saw too many red flags when I was checking them out. I’d stay away.

Well, I can’t say for anyone else, but my contract stint there ended up a failure. Worse, I can’t do anything with the story I wrote other than walk away from it. Or occasionally remind myself that this is the story I lost. And I don’t get any money from it. I ripped myself off.

I seriously recommend you read and understand every bit of the contract if you get one.

For Webnovel.com, no matter what version contract you receive. You no longer own the story once you sign it to their contract. The content control is no longer yours to do as you please.

So, if you do sign, it’s better to give away a standalone that you’ll never plan a series out of.

Also, with Webnovel. It’s a scrappers’ paradise. So if you sign a contract and slug away on the 1.5K daily updates to earn the MGS of $200 per month, you may lose greater revenue opportunities due to piracy.

All stories published to webnovel are scrapped to pirate sites like Novellhul and fake Wuxiworld.

This is my experience and observations to date.

that’s legal to do?

Your thread looks like it’s better suited to #writing-support, so I’ve gone ahead and moved it there for you.

Would STRONGLY recommend avoiding Webnovel and ALL of TenCent’s properties. I can’t remember the details, but someone shared their contract back on the old forum, and the contract was AWFUL.

That site name has been thrown around so often in wattpad pms, random spam comments, etc., that it’s definitely a questionable site. Don’t interact with it at all

Traditional publishers can do the same but if you have an agent, the agent would help you figure out what you’re signing on for and you could negotiate.

So if you sign a contract and slug away on the 1.5K daily updates to earn the MGS of $200 per month,

I ripped myself off.

Don’t blame yourself for it. They ripped you off. You were the victim of their shady practices, and you know what they say, you don’t blame the victim.

So, you treat it as a way to get your name out there, but expect to junk the book.

That’s a hard place to be in because why would you want to write your best for that?

Its a scam. There’s no “easy route” to publishing and anyone who’s reaching out to you wants something from you

I ran into Webnovel early on, and thankfully I didn’t do any contracts with them, but the thing is, even free story, well, you can’t delete it from their website. You can delete chapters, but the placeholder remains there. Even Inkitt is better than that, lol, because there you can delete account and story.

To be honest, at the time the promise looked good, and I was gaining a following. But since my book was gay, it wasn’t mainstream for them back then. So, the most I got out of it was 3 months featuring, in mediocre rotations. Since a lot of readers back then weren’t into BL there and of the serious kind, I got shafted. Wrong place, bad luck. Plus I wasn’t part of the clique club.

Adding, in their defense, they were the first organization to accept my story as it was. Accept a gay story to be on their contract catalog, despite being renowned for providing mainstream tropes. So, I will keep this as a positive. I guess, I’m just bitter because my story wasn’t set up for success there at the get go.

Yes. It’s in the contract.

Yep. I know writers who have to write into 200 chapters to break a profit. Most stories there run into 1000+ chapters, since you’re basically writing an entire series rather than one book. Oh, need to mention on MGS, you can’t miss a single day of minimum 1.5K words per chapter in the month. If you do, you lose out on nabbing the guarantee sum. There’s some advantageous logic behind it that I don’t understand. Since I never understood that entire labor program.

If you enter their Webnovel Spirity Awards, you’re encouraged to sign the contract to even hope to get a look in. Since this contest is all about popularity and writing quality can be so-so, as long as readers are flocking to pay to unlock chapters or vote on the book it has a chance to be in the finals.
By flocking, I’m talking about tens of thousands, even millions of views and interest.

Webnovel/Yuewan/Qidian/China Literature/Tencent (I’m listing out all their known aliases and parents). Will promote what their management wants to market. It’s generally what the masses are binge reading. If a book gets 1000 paying readers, they will promote that book to kingdom come.

Every other contract author has to do their own promotions. Pretty sucky since they literally don’t own their books.

I almost got 1000 readers but only a fraction paid

So, another reason the book is shafted.

The perk is at least it’s still available for reading (at least for now). I can still edit if I want to, but I can’t do anything else.

Edit: I will add that the Content Editors are nice and well meaning there. They honestly believe in wanting to help writers and their stories. Unfortunately, they’re dealing with business management that likes to change things without noticed. So there’s only so much they can do. 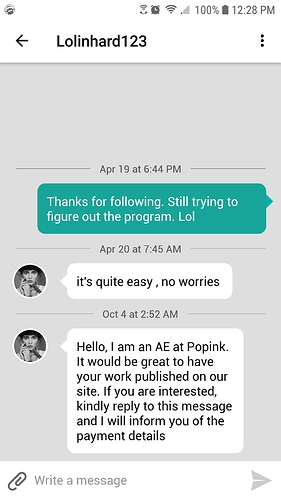 I mean I’ve got little to no reads on anything, and only my shorts are complete, so I’m disinclined to just go try it.

Webnovel is a fraud, towards both readers and writers. I’ve heard of stories like everyone else has written in this thread.

Create a website that offers free and paid content. It doesn’t bring much profit because online users want everything free.
What do they do when they meet a paywall? They google the story title for a free version.

Let’s create one for them and pretend that it’s a mirror site. Post the popular paid titles there that we own from our “legit” business. Load it with adware and spyware, whatever we can. Gather user data to sell on the data market.

End result: Users flock to our content (which we paid pennies for and own indefinitely), we get their data and rack up the profit.
It’s a long-term investment but it becomes an easy passive income, an engine that oils itself.

Exploring greed of the online audience and desperation of aspiring authors.
…
…

I think the bottom line is, we need to value our work. Don’t settle.