What are some of the nicest things people have said about your work?

As the title says, what are some of the nicest things people have said about your work? It can be writing, artwork, whatever. I’d love to hear them.

I love that a lot of the readers direct message me to see how I am doing once they finish my books. Some to check on me because I used to write sad stuff and some to talk about how it helped them. I find that very supportive.

When all my readers were making speculations about my story plots, and uumm, most of them thought like Wattpaders, of course. One of them said: “Nah, I dont think so. This author hasn’t done any major drama like that. And I would be surprised if that plot twist were true.”

It means, she read my works and she knows HOW I handle my story. I feel so flattered.

I have a couple of people that follow each of my books as I write them, and I’ve had a few times they will comment about “how amazing” my writing is.

it made me laugh and then I started crying out of happiness.

Generally, though, I love it when a reader secretly sees what I’m going to do. I have a few friends who read my work (friends I met on WP) and they tend to see the twists I’m going to make early on, probably because they know me and my work so well, I love those kinda of things and they (weirdly?) flatter me because they clearly know me

So I’ve already shown this to the mods, but it still makes me happy and feel good, so I’m posting it

. This is a message that I got from my new assistant principal at my real life job about a week ago when she sat in on one of my classroom counseling lessons.

I’ve had people say a lot of nice stuff about me and my work, but the time a friend said I stopped them from giving up on writing because I loved their book has to take the cake. It just made me feel so very accomplished that I was able to help someone fall back in love with their passion just makes me so happy even now.

I’ve been told that my characters are very huggable

Who has read my stuff? Who has seen my “artwork”?

When I make memes, I get laughs out of half the audience, and rage out of those who take everything seriously. Troll forums: people know what the game is and still get mad. I’ve got people who ask me to edit tings for them, so I know I’m competent for edits.

People like things, here. I’ve had someone read a short story or so of mine and gush over it: as a payment for bailing them out for a judge that bailed. I’m sure she liked it, but that was obigation.

My father is a father of faint praise–so I know his compliments are genuine.

Made an Elephant out of pipe cleaners for fun–“Where did you get the pattern for that?!”
“From my head, Dad.”
“I wish I could see things before I made them. Only did that once: saw a cane from the branches of a tree.”
We still have the walking stick.

“When you were in kindergarten, you drew an Alligator and I could tell what it was.” He couldn’t make out what a lot of kid’s drawings were.

“Someone started singing in church, and I couldn’t figure out whose voice it was. I kept looking, and it was my 8 year old.”
I sounded like an adult.

My mom had similar talents:
Not that she didn’t think I did good, but I was following in her footsteps, and she her father before her.
I married a man of similar talents:
Some things he’s better at. HE is the one who wanted to be a writer: but he works for a living, and so he lives vicariously though my writing, a bit–just to stay “in the field”, so to speak.

I mean, I have a bit of swagger over my self-worth, here, but if you started heaping praise on me, you’d see that shrivel up un a heartbeat. I don’t take compliments well. I mean, the voice of a goddess as a child, and adults always complimented me on what I had no choice in being. Is the worth in me or in thing I can’t help?

I mean, I’m one of those people who is competent in damn near everything I touch–a jack of all trades. I don’t need people to tell me I’m competent.

But legit, I don’t know what I’d do with an excited fanbase.

You seriously do though. I love reading your comments XD

People at school constantly ask to read my stuff for some reason. The few, brave-hearted souls who actually do always wind up liking it, which is nice.

I’ve had a lot of people say things about my writing, but reading past reviews, especially these two, after more than a year of being away from writing made me fall in love with my story all over again ~ 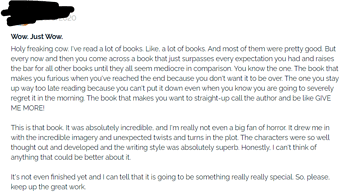 I’ve had some really nice things said about my work, but one of my favorites came about 5 years after the fact. Here’s a Facebook message that a young lady sent to me about two years ago. I want to give a little bit of backstory though. I used to critique…a lot…on Wattpad. I made this girl cry. Probably a lot. And then I held her hand as I gave guidance to her in how to fix her story. Here are the words she sent me in that Facebook message:

I really hope you’re well. I was, after a long time, helping a friend with her narrative piece and suddenly I remembered you. And I frantically tried to recall your name and search for you. I just wanted to take out time to really thank you. Your guidance helped me throughout my English classes. It gave me confidence, it gave me support and encouragement and I can’t thank you enough for impacting me enough that I still remember how much you helped me step into the world of writing. I now realize how much I nagged you, and disturbed you and how big of a deal it is to edit someone’s work for free - that too an annoying 12-13 year old kid. You had your own busy life and schedule. It’s amazing what you did – thank you so much. I hope you and your kids come across such kind souls often. With much respect and admiration.

A couple months ago, a follower messaged me this: I read Ooops again yesterday. I read it when it originally came out. And then I looked for it again recently. I’m coming up on thirteen weeks pregnant with my first child, and it has been ROUGH. Reading your story has really helped me a lot. I mean, I get a lot of advice and support from my mom, who birthed eight kids. And from my mother-in-law, who birthed three. But for some reason, seeing it all written down with the nitty gritty details has been the most helpful thing of all. I really just wanted to let you know that I appreciate your sense of humor and your writing style so, so much. I loved the honesty and the openness of your work. Thank you very much for that.

I’ve been really lucky to receive some really kind words regarding my work.

I’ve had quite a few people constantly tell me that I need to be published.

There’s been many who have said I’m an amazing writer, too.

I have a book available for pre-order on Amazon right now, and whenever someone orders a copy it’s seriously high praise to me. I mean, I assume they wouldn’t be pre-ordering something unless they liked a previous book, right? Surely they can’t all be ebook pirates…

As an e-book pirate myself, they’d be better off using Zlibrary

So I got a comment on my first book and it said that my story made their day. They said we need more people like me who write out of pure passion and that my story should go viral. Completely made my day!

… I was oddly flattered by that

In general? That it’s unique, tends to be well written and interesting.