What does “character-driven” even mean?

I keep seeing people talk about plot vs character driven books all the time but it confuses me because characters should be able to drive the plot with their desiciones. That IS what characters are for, no?

In some stories, the character’s are kind of just along for the ride and let the plot happen to them instead of directing the plot with their own actions. This isn’t as common in action/adventure stories and tends to be more common in slice of life or other slower paced stories. I find character driven plots more entertaining, myself. But that’s personal preference.

“Plot-driven” stories are often driven by events external to the characters’ arcs and development: there might be a meteor about to crash into the Earth, or they might be fighting to stop the supervillain from killing the entire population of Canada. In these stories, the plots and spheres of influence often span beyond the main characters. Lord of the Rings would be an example of this. Something character-driven is reliant more on interpersonal relationships and character growth—not to say that the plots can’t be important, but in Lord of the Rings we care more about whether Sauron is going to win than if Frodo finds inner peace.

Characters can still direct the plot in character-based stories, but it tends to be “closer” to the characters and also with more direct implications for their growth versus larger-scope events.

A good example of a character-driven story would be The Catcher In The Rye, where while Holden certainly does things throughout the novel besides sitting in his room, the crux of the story is his change as a character. Even something like The Great Gatsby fits: there’s no day to be saved, but there’s conflict which moves characters forward and things change by the end of the novel. There’s still tension, even if the stakes are localized to East/West Egg and not the world. You’ll also see plot-driven stories as ones more capable of getting away with shallower characters, or ones that are more stock archetypes than fully 3D beings, since they have to do less of the heavy lifting to make the story cohesive. 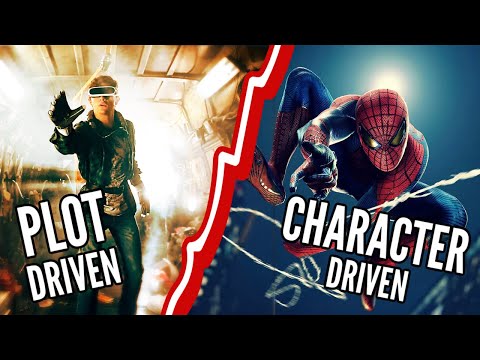 Character comes first and their inner drama is connected to the plotline, growing with it. One doesn’t exist without the other, and every movement of the plot is amplifying the character change in an advancing progression. It is an intensely personal story—for the main character. And nope, they don’t have to be only about their development. The trick is to link the two. Then the story is gripping. Very hard to do though….

I’ve heard that if a story’s MC can be anyone, then it’s plot driven. Doesn’t matter who the character is. Not really. It can be Character A or Character B…overall, it won’t really change the plot. I think LOTR is plot driven. It could have been any Hobbit’s task to deliver the ring. Sure, little things might change along the way based on little character decisions. But the main plot to deliver the ring does not change because of the character. No matter what, someone has to do it.

If the story has to be told from the character’s perspective, and plot changes based on the character’s decisions, that is character driven. I think…not sure, but Harry Potter is character-driven. He is the one with the scar. It’s about him and his scar and his relationship with Voldemort. His decision to do this or that affects the entire plot. Sure, other characters can have influence on the plot, but ultimately, the story is about HP, so only he can, in the end, affect the plot. (As an example as much as I know, that is, from only watching the movies XD)

This is my understanding.

That argument is doubled down on when you realize that Sam did duplicate Frodo.

I’ve also seen arguemnts that one is more western and one is more eastern in view…it may have been introduced here, some 6 months ago.

It’s a generalization that I am hesitant to subscribe it.

This is going to sound strange but can a story have a little of both…somehow???

Strangely, I always thought LoTR was very character-driven. It’s all about the inner conflict – Frodo has to get rid of this evil ring or everything he loves will be destroyed, and yet he’s terrified of doing it. And all the while, the ring is slowly corrupting him to the point where he doesn’t want to give it up at all. The quest forces him to do things he wouldn’t ordinarily do, but the real story is all about the inner conflict, in my opinion. ¯\_(ﭢ)_/¯

True, but what if that was Samwise instead?

Samwise has to get rid of the ring or everything he loves will get destroyed…but he might be scared… Then it corrupts him. Might have lots of conflicts… doesn’t change much in my opinion. Even if it is inner conflict. Maybe little things might change, yes, but not the major plot things.

But I can’t go against someone who has read the book, as I’m assuming you have? I’m going off the movies XD

Nope, I’m going off the movies too! Never read the books, but I assume the movies stuck to the story accurately. If it were Samwise instead, it would be a slightly different story, since he had a different personality than Frodo, so I honestly can’t imagine what that story would’ve been like. But it’s interesting to contemplate! Personally I liked Sam a lot better, except in how he treated Gollum.

I just remember the article being put up and reading it in passing. I just don’t remember precisely where I saw it. I think it was from a Chinese-Americsn writer’s perspective (and I’m not even sure I’m remembering that much right: if it turns out she’s Laotian, Google is going to have a conniption).

@FranklinBarnes what I remember of it was more towards slice of life and events happen to the character, less dependence on a driving plot. I’m not wholly sure the difference that article writer was seeing would fit this split.

The only reason I didn’t automatically ignore it and this much stuck with me was because of older documentaries on Bill Cosby (before falling g out of favor), covering how he viewed his comedic style through cultural differences between him and other comedy of his era.