What Makes a Good Cover?

This idea popped in my head becuase I needed to make a cover for my story and I crapped out this one: 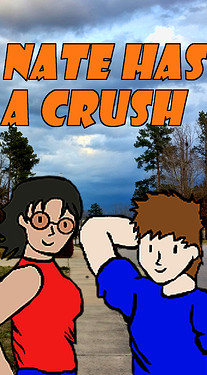 Nate has a crush temp cover1488×2680 1.33 MB
Some folks I showed it to told me this one was cute, but I hate it so much. It’s just so boring. It doesn’t covey anything interesting about the story, the person who drew the two characters clearly didn’t know how to draw, it’s just two people standing in front of a photo of a neighborhood, one of whom looks a tiny bit like Linda Belcher which was unintentional.

Tl:dr I hate this cover becuase it’s boring and looks like it had very little effort put into it.

It got me curious though…what does make a good cover? How do you make yours? What makes you enticed to read someone’s story?

Covers normally don’t draw me, titles and summaries do. I read a lot on Wattpad and Tapas.

The covers I like are:
Uncluttered
Well-drawn (classic style) vs photorealistic
Interesting use of background colour, symbols, font or frames
Tells me what the book is

I’m more into the minimalist, neutral couloured covers which is why all of mine are like that too

but obviously it depends on the person but that one would probably not appeal to many people. No offence

Good ratios, good perspective, super easy to read, and effective use of space. I’m gonna talk about them one by one because I have nothing else better to do.

Effective use of space: Taking up too much space with certain elements or having too large of a gap on a cover can make it look very off. If your title is the smallest thing on your cover, it defeats the purpose of a cover. People are supposed to read it which ties in with readability but I’ll expand on that more later. There’s also the issue of certain elements taking up too much space that it looks cramped. I notice a lot of titles sometimes don’t let themselves have enough empty around the title and it’s way too close to the edge of the picture or straight up touches the edge.

Good ratios: Everything should be centred unless there’s a good reason otherwise. Again it ties in with empty space. It’s great to fill everything in, but it needs to be balanced with empty space. You don’t want a cover with it being too busy. Then there’s also balancing the other elements like people next to a wolf or a person next to some object. Unless the person is a literal giant, they should be scaled properly. Way more relevant to drawn covers I think since body proportions are a bitch to draw.

Readability: If I cannot read your title, then it instantly is a terrible cover in my personal opinion. The whole point of a cover is to read your title. A book is to read, not to play “eye spy.” If the words are too thin and get lost in the image used or the image itself is too busy and even if you use a white or black text that its still hard to read, you need to create an ugly block of blank space to put those words in or yet that image.

Perspective: If you have an aerial view, it should stay an aerial view. If the person is looking up from the ground and the image is tilted upwards and there’s a plane but the plane looks like it’s directly in front of the person, you need to rework the cover.

Honestly, I have no idea what makes for a tasteful, relevant book cover. But I know what I like, and right now I love those abstract artistic covers all the major publishers are using that tell you absolutely nothing about the book, but look kinda cool. ¯\_(ﭢ)_/¯

If your target is for junior to YA age readers, then it might suit. If you’re doing a chic lit or serious kind of YA story then photorealism or pastel colored text-type covers tend to be the given.

It depends on your target audience and what most of them are used to seeing. If in doubt, check out covers at Amazon, Kobo and so forth in your given genre and age groups.

what does make a good cover? How do you make yours? What makes you enticed to read someone’s story?

A discussion about covers!

I’m at home. Covermaker, but not a pro. Still, I’ve done it for 6 years. I also enjoy dissecting covers and thinking about what makes a good cover.

So, what entices me?