I have decided to try something new in order to finish a book idea I’m working on.

In short, it is my take on A Court of Thorns and Roses.

My main focus is to make the characters more dynamic, the enemies to lovers plot flow better, the villain more threatening and smart, and the fairy world more. magical and interesting.

The next chapter is where the main character is introducer to the fae.

Just a heads up, a smarter villain:

What if the villain is a bored sadist?

For that last one to work, it would have to be like a reincarnation quirk, where the only way he is reborn is if he is remembered. If it’s not his first time, he’d be bored and inclined to be sadistic.

So, they would have to stumble on the fact that he’s a reincarnated asshole.

But there’s other things that could be done, like the risk of dying is the only thing worth living for, but he doesn’t want to waste his time killing low-level heroes, so he spends his time creating conflicts to forget something worth his death. It’s an arrogance.

Aad you can show that by having a well-known hero that these protagonists are emulating die in the first 3rd, and him just say, casually, “Well, you’re not the one.”

And others ahead of them could die right and left. Game of Thrones that shit.

But the whole point of this is to leave a trail that he is like this while making it look like his goal is something else, like world domination.

I don’t think it would fit for Liliwyn. She cursed the Lord of the Winter Court to not be able to be in his faery form for shits and giggles. The only way she’ll undo the curse is if you beat her at 3 games of chance.

It’s a mental exercise, really. I tend to template before getting into a character.

In the case of a character that is established before the story, you have to have a hidden goal and a surface goal, minimum, to make a villain feel smarter than they are. It allows you to use dumb plots for the surface goal without needing to worry about “is this smart enough”. The true intelligence needs to be kept for the private goal.

Honestly, this is just how Liliwyn spends her time, she finds her job as Night Minister(Overseer of all Unseelie) very stressful and lonely, so she finds that cruel pranks are a great amusement.

Can you judge this character for me? 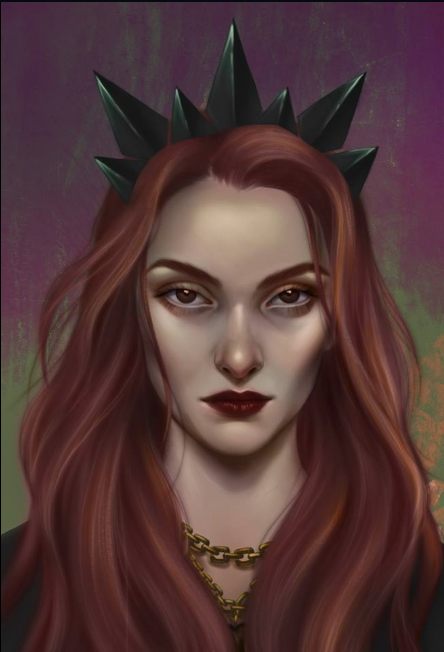 Though lovely, she wasn't as devastatingly beautiful as I had imagined, wasn't some goddess of darkness and spite. It made her all the more petrifying.Feyre about Amarantha, A Court of Thorns and Roses Amarantha (pronounced: Am-a-ran-tha) was a High...

so she finds that cruel pranks are a great amusement

It doesn’t make for a compelling final boss.

But: it would be funny to have the final confrontation be with accusations of all this great evil, while they’re trying to attack her, and the response is, “You think I give shit one about this?”

It doesn’t make for a compelling final boss.

Not exactly the kind of story I need for this to be. Her strength is saved for any armed uprising or assassination attempt.

But: it would be funny to have the final confrontation be with accusations of all this great evil, while they’re trying to attack her, and the response is, “You think I give shit one about this?”

But it might be nice if you could show the woman is tired of the conventional laws that govern the fae, but unwilling to break from that, if she’s going to use a riddle battle.

Hrm…telling the MC something like: “you were chosen for this game, so your death is predestined”: basically saying she can’t just up and kill her without giving the person the freedom to think they are safe.

Me personally, if I was going to do a riddle, I’d ask someone to give me the proof of the value of 1 being 1. That’s about a sheet or so of math to prove the value of the number. Riddle, hell no.

Muriel can barley do arithmetic. Just ask her to use the pythagoerean theorym to find x and she’ll lose.

All she has to do is point to the x on the paper and the minimum is satisfied for “find”. “Solve for” absolutely required finding the value. Using PT is the issue that swings, find, though.

Anyway. What are you particularly working on for it, right now?

Muriel and Ellaric’s enemies to lovers romance. Muriel shot out Ellaric’s eye on a hunting trip, and Ellaric had to take her as his prisoner. Also Ellaric has to be in ice praying mantis form all the time at home because of the curse-he needs help to even drink from a glass.

Sounds like Muriel should wind up helping him because she’s impatient with him trying to do things himself. Given how everything is a trial, some of it would be deliberately done by Ellaric to see if she has more merit to her than merely being violent. That would also give her a point to get pissed at, when she figures out that he’s testing her (after a time). Of course, he can be annoyed that she doesn’t understand that whole of who he is, is a test.