Your favorite lore/myth that you've created for your fictional world!

Is there a lore/myth in your fictional world that you really like/ are very fond of?
It can range from anything you want it to be. It just has to be a lore and myth.

So, tell me about the lore and mythology that surround your world. I am curious to know.

I’ll even accept historical events, figures, and more that you also find yourself loving.

See, this is a bit weird for me as a believer in a faith. Some things people will count as myth is real events.

So, do I have myths or do I have historical facts about the world that people doubt because they weren’t there and somehow their belief on facts is important?

In some cases, this is VERY important as “the gods walk among us” or “the gods demonstrably interfere”.

If I write of a great fire in pre-history because of a fight between Gods or God and man, and my story takes place much later, and I, the writers.assime it’s real: would the reader take it at face value or for “Oh, cool myth!”

But for all of that, I e got myths and historical events that piece through stories…but only one that is fully spelled out. That one I will grab when I get on the computer.

I think if you do a good job of blurring the line between myth and reality, it can create an intrigue that the reader will want to resolve. So any time you reveal new information relating to it, it will be an exciting moment for the reader.

I think this requires the narrator not to go into historical details, since those would be assumed by the reader to be fact. Better to reveal those details through dialogue or some other way. If it’s written in first-person then it probably doesn’t matter either way.

Definitely, when it’s important to the plot or main subplot. The further out you get, the less important it is to give it that treatment.

Still haven’t sat down at the computer to pull up my dang example of blurred lines. That will be soon.

This is the beginning of a story where the first arc is currently 51,887 words long. It happens to be the way I introduce the story and is only incidentally important to the plot.

But it is a mildly adult example of how facts blend in with myth, when looking at history, for this story.

There’s a darker nature to the way people grow up and live, so I think one of the interesting ways this can be seen is in their ‘old wives tales’, fables and myths, people whom are considered legends (they have their own version of King Arthur, for example) but behind the darker turns and twists is a heavy sense of caution, because the things told in these fables and rhymes could actually happen. No one is a stranger to death, nor the entrapping’s of evil and madness that seem to be a constant in their world.

I also consider the way I’ve created the environment unique. Although this is still being sorted out, as I am no astrophysicist and I honestly find earth and space science kind of boring (ahh), the way their environment functions are a bit different than earth. They’re constantly plagued by natural disasters (mainly hurricanes) asteroids have hit their planet several times. Part of their moon is all fucked up so it looks like a half bitten cookie. This also has an effect on the people, and the way they behave and function emotionally.

There is a persistent myth that you can turn into a vampire if you are alive, most agree that only the evilest of acts can make you into one.

I don’t know if I have anything prominent within my work in progress that’s actually a myth.

Like that’s actually completely untrue, or so fabricated it might as well be. Most of my stuff that’s treated like myth and legend is stuff that is true, but isn’t quite like people expected.

Like the God-Hero’s prophesy. So, the first superhero who brought magic to the world claimed to be god. And he is a god, but he’s part of a pantheon he conveniently didn’t mention. He stuck around for a decade to make sure everyone didn’t destroy themselves in the chaos, and then left a prophesy behind. Summarized, he told everyone the world would one day be ravaged by a magic-devouring monster, ‘The Prophetic Devil’, and when doom was nigh, the God-Hero would send his goddess daughter, Rolling Platinum, to earth in mortal form to lead the war against said devil.

So for over a hundred years the whole world has been waiting for this monumental battle between good and evil, and everyone has a different idea of what that means. Some people think the devil will be an eldritch monstrosity of some kind, some thing they’ll just be a really powerful supervillain, most racists/sexists/homophobes/etc insist the devil will be a member of whatever group they hate, organizations and entire nations have used ‘one of them might be the Prophetic Devil’ as a justification to start wars, most countries have laws that legalize the slaying of the Prophetic Devil for anyone who finds the real thing and happens to get the opportunity, and there have been countless ‘devil scares’, where a villain pretended to be the devil, or a civilian or hero was mistaken for them, and countless killers have tried to justify murder with devil law, genuinely and/or as a joke. Nobody knows for sure what they’re looking for, and everyone has an opinion about it, whether they think the devil is that one guy they always hated, or some unfathomable cosmic horror, or just a joke the God-Hero told to troll everyone.

Everybody’s losing their mind looking for Rolling Platinum too. The God-Hero’s churches have all kinds of clubs and competitions for girls who could be the Goddess-Hero. The God-Hero vaguely implied his daughter would have blond hair and blue eyes, so a lot of women and girls with those are favored while others with other colored hair and eyes are discriminated against, and it’s an unreasonably huge debate among the church whether Platinum will have a certain aesthetic or could be literally any woman, including to a point where there are people who will pay or force blond, blue-eyed women to have kids in an attempt to breed Platinum into existence. It was implied she’d have a great singing voice, and maybe be a skilled swordswoman, so many parents force their daughters to learn to sing and use a sword, and now there’s a whole hecking lot of ripoff Platinums running around. Many girls are pressured and pitted against each other trying to be the best Rolling Platinum, and many end up feeling crushed by the system, although some become scarily good swordfighters and end up thriving from people mistaking them for a goddess.

Rolling Platinum and the Prophetic Devil really do exist. The Devil is a magic-devouring monster, but he’s also just a dumpy, goofy, sarcastic, undertrained graduate hero who wants to make friends, do cool magic stuff, and make his parents proud of him. And Rolling platinum is a blond, blue-eyed, singing swordswoman, but she’s also a loud, angry, silly, socially awkward hacker and gamer girl who no one takes seriously enough to believe she could be an angel. The Devil ends up gaining compassion for the world, but not helping as much as he’d like to because he’s taught to believe his help isn’t wanted, or necessary, because he’s what the world is fighting against, and the Angel ends up being bullied into not wanting to help the world at all because she isn’t the perfect girl they expect. Doom is nigh, but it’s not because of some great black and white clash between good and evil, it’s because the world concentrates its attacks on the wrong prophetic figure.

Probably the Seven Guardians of Elgana myth. They were actually real figures chosen by the creators of Elgana to keep balance in the world but were turned into legends and myths as time went on and the natives mostly died out. The guardians also faded away after they became corrupt. But currently they are thought of as myths the same as the moon goddess. Only two active guardians remain, but no one knows that.

It’s funny what humans can do to an entire culture. Well, it’s not funny, but they really changed the world over time.

can’t believe i missed this lol ill be back

Oh, there’s another myth. The Mountain Maiden myth. The Mountain Maidens were already a myth during the last generation of native Elganians. They are mechanical beings as big as mountains said to have been created to represent and guide each of the seven guardians to a mountain that is said to connect all the six torus (donut-shaped) planets. The mountain is said to exist in the same place for all the torus planets.

Inspiration for the Mountain Maidens below. This is what they look like today, supposedly dead, lying about in broken pieces in the desert. No one knows who made them for what purpose, what they were used for, and how they died. 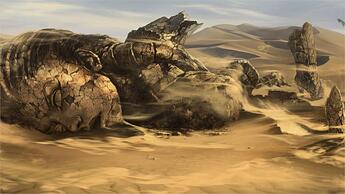 Those are some good myths. Both the Guardian one and the Mountain Maiden.
Still, I am confused about the world of Elgana.

Please come back soon. I don’t know how long this will be here.

Still, I am confused about the world of Elgana

Not my best manipulation, but here’s what the innermost First Ring looks like. There are five others around it. 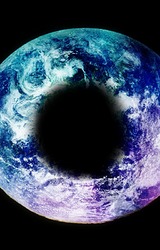 Dang, that’s a hard one. I’m technically still developing the mythos of the God Worlds

I’ve got the First Beings, Primordials and most of the Elementals down, as well as some famous historical figures and events, and some stories.

@DollyTH this might clear up some “Hero of Blood” confusion haha

The Zenestians struggled to explain their origins with means other than that of this particular narrative (which, isn’t true in canon by the way lol).

The early Zenestians believed they were created from the sea by Meiste itself, and they looked much like Meistian “Gorgons” (the word itself is actually a loan word from Zispoel that means snake, I just don’t remember it right off). So they learn to fish, build homes, and shelter themselves from the rain, and they were directed by one such Hero of Blood.

The Hero of Blood (in the Northern regions of Zeneste) is also called the Hero of One (in the Southern regions). Basically, she led the pre-human Zenestians to the sea and was guided by Meiste itself to lead her people down to the water to bathe. And one by one they became human and appeared in the promised land: Zeneste.

This myth stems from a variety of things: the Great Emigration of the O’a people from the southern part of the world across thousands of miles of ocean to eventually land in Zeneste; the origins of fishing and wheat farming in Zeneste; and the origin of the Heroes.

The Hero of Life would later popularize the story much more lol but that’s the gist of it.

That’s interesting considering a lot of lore and myth surrounding beings such as vampires, werewolves, etc. are usually used to depict true human evil. Werewolves, for example, are commonly used as a metaphor for the loss of humanity. When man gives in to inhuman desires and executes a will of evil onto another. Vampires are perhaps metaphors for those who wish to supersede death, to give into their desires for power, and to inflict the idea that you can steal one’s lifeforce right from their veins.