Saw Shadiversity make a video on ai generated swords, many of them are absolute ambomninatioms. Want the link?

My latest pursuit that made me spend over 40 night cafe credits and after running out, I ultimately still had to use hundreds of Dream generations for is Jasper. Jasper is an Incubus demon and he’s my MC’s father.

I wanted to share to show how much effort takes to create these images.

Before I ran out of credits, the best Jasper images I got out of that fiasco were created with Dalle, not the most imaginative but they sort of have his vibe: 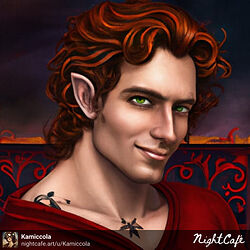 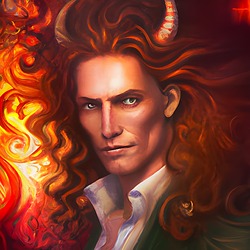 Not bad, but not the Jasper I imagined.

So I tried to create Jasper out of a prompt in Dream (no luck), and I tried to create him out of one of the many images I’ve created of my MC. Unfortunately, every time I mentioned “demon” in the prompt, Dream kept interpreting it as an angry demon face and that doesn’t represent Jasper at all. He’s supposed to be seductive and ageless. He’s 300+ years old but should look fairly young because his race doesn’t age. And he should look not too different from my MC. I have hundreds of my MC’s images so he doesn’t have one definite face but still, there’s a certain feel I have for what he’d look like and it took a long time to get his father.

Eventually, I’ve used a mashup of my teenage MC’s image plus a demon image derived from that image and then mashed them together with pixlr/e just to get my MC + horns. 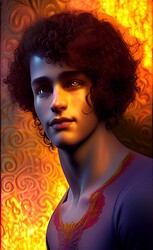 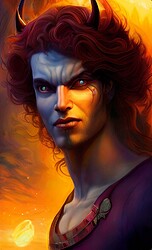 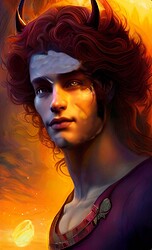 And after many regenerations in Dream, I finally got these two which could work as Jasper. 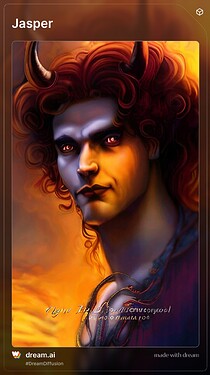 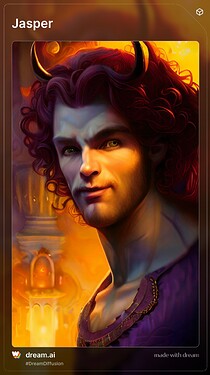 Still not sure which one should be the official Jasper. Both could work, depending on how demon-like I want him to be, but overall, I’m pretty happy with the result.

It was just frustrating how long it took to get there. Fantasy races remain to be really difficult.

Hmm. I just noticed the fake writing over one of the Jasper images. I could overlay them, I guess, to get rid of that. Sigh. No matter how much time I spend on getting AI to do what I want it to do, it always takes manual image manipulation for the finishing touches. AI, you still got a long way to go.

Yeah, I can see that. No hooves though. He has a demon tail instead. 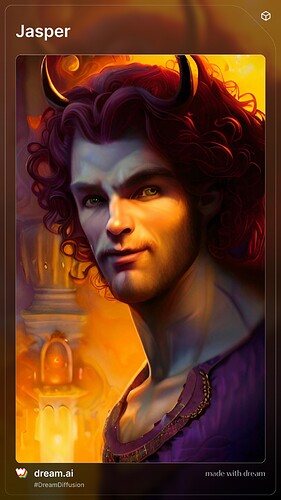 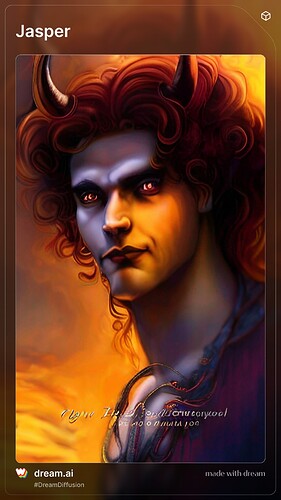 It reminds me of Buffy vampire lore (face changes as they get their vamp on).

It’s certainly something to consider - should Jasper’s appearance change? But he wouldn’t become an ugly demon.

The lore I created is basically that Incubi are everyone’s type and everyone finds them attractive.
I was considering doing that without any facial changes other than them knowing how to adjust their seduction methods based on whoever they’re trying to seduce.

I wrote one scene like that already and I think it works, but I haven’t had anyone read Jasper scenes yet so I’m not sure if it comes through to anyone other than me.

I usually play it as partially psychic. You see what they project, and while the true face may be pretty, its more noticeable that that ain’t kosher.

Which means if you write a person with near perfect imperviousness to being tricked like that, they would see the real face. Then you could decide on adversary or “love you no matter what”.

I just made my incubi and suucubi have a true form that looks like a demon ghost chihuahua.