In order to understand what makes good prose, take some beautiful writing and rewrite it to be less so.

Ah…I was making a bad romance novel cover at home, now taking someone to their doctor apt. When I have it done, I will post it.

I already had that one called “Stacked”.

In order to understand what makes good prose, take some beautiful writing and rewrite it to be less so.

TBH, I don’t give a crap if the prose is beautiful or not, as long as it progresses the story, and as long as it makes sense in context and is grammatically correct. And it’s not too dry, or too purple.

You may regret those words.

Because I will ruin the writing of your work 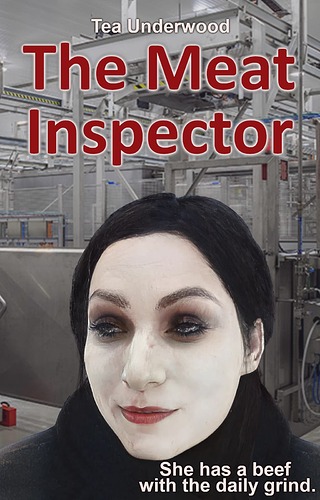 The best part is that’s a mask rendered as human and blended with another blended human, so not a real person at all.

But this is more what you’re looking for:

Once upon a midnight blurry, while I pondered, weak like slurry,
While petting a quaint and curious dog from the movie UP—
While I nodded, nearly napping, suddenly there came a scrabbling,
As of something gently cracking, scratching up my chamber floor—
“'Tis some rodentia,” I muttered, “tapping on my chamber floor—
Only this and nothing…”

The days dripped by like the evolutionary sludge of like to love. White Fang himself began to grow aware of it as if it was a scent, an obsession of the primitive mind. It made him hungry: an aching, yearning void that clamored to be filled. It was stomach pain and unspent wanderlust; and it received energy from an eldritch god. At such times love was the excitement of nausea, a wild, pent-up expulsion. But when away from his god or blinded by Covid, the failure to thrive returned; the void in him sprang up and pressed against him with its emptiness, and abyss of death chuckled unceasingly.

The crazy part is it isn’t badly written in a grammatical sense or a humorous one, but trying to take it seriously is a no-go.

What probably hurts my writing the most is this sense of humor plagues everything.