Help me with a title!!

Hi! It’s been a while but I’ve been trying to figure out a Title for this story I’m writing and I need a little help.

It’s a funny story actually but basically I was reading this retelling of the classic Alice in the Wonderland story but it’s in the POV of the Queen of Hearts. While reading through said book, all I could think of was how I could definitely write a better story than that so here we are:)

Actual context to work with: This story revolves around the Princess of Hearts and how she has to complete three trials to win the crown along with her three other sibling (respectively named Prince/ess of Clubs, Diamonds, Spades). There’s a lot of action, fighting, puzzles and stuff like that. All the siblings were separated when they were young so they don’t feel much kinship and are pretty hostile and cruel towards each other.

I hope that’s enough info?? And of course you can ask for more if you’d like~

Other titles I’ve come up with but it didn’t really feel right for me:

I’m grateful for any help:))

This is more to start thinking in different areas:

Ah, thank you so much!! Tbh I’m pretty sleep deprived so my brain just wasn’t thinking but those ideas are so good and I can’t believe I didn’t think to brainstorm a little more

Get some rest and go back to them, set up a vote if you’re torn. 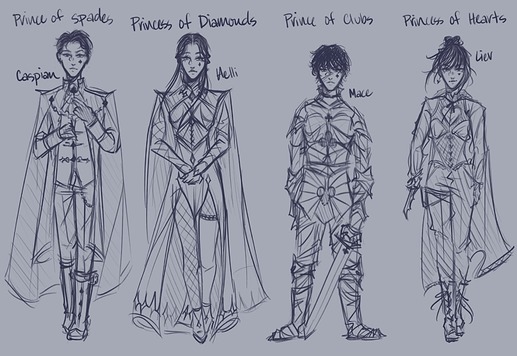 OMG. These are amazing sketches! Prince of Clubs looks so damn cool!

Thank you! I want to keep it simple too lol

A Royal Flush.
Playing the Cards.
The Last hand Shown.