Interesting paper on literary fiction and its benefits

I saw this interesting paper linked on r/books and thought to track down a full copy, which thankfully one of the authors provided on their own website:

The abstract, which I assume is as far as most of you will read, is interesting in of itself:

“What are the effects of reading fiction? We propose that literary fiction alters views of
the world through its presentation of difference - different minds, different contexts, and different situations—grounding a belief that the social world is complex. Across four studies, two nationally-representative and one preregistered (total n = 5,176), we find that the reading of literary fiction in early life is associated with a more complex worldview in Americans: increased attributional complexity, increased psychological richness, decreased belief that contemporary inequalities are legitimate, and decreased belief that people are essentially only one way. By contrast, early-life reading of narrative fiction that presents more standardized plots and characters, such as romance novels, predict holding a less complex worldview.”

The paper is quite meticulous in its argument, and I’d advise you to at least read the introductory sections (through page 7 or so) to get a feel for what’s going on. The “general discussion” from pages 29 to 35 are also of interest if you don’t care about the statistics. Do you think the same arguments used apply for non-literary work? Is there anything you think they’ve done wrong? I couldn’t see anything obviously wrong with the math, although I admittedly wasn’t checking too closely.

Edit: I read the paper again and I was very wrong: there are some funny things going on with the math. Maybe it’s been too long since I’ve taken a stats class, but I don’t recall p=0.051 being significant, and the actual p-value is going to be higher than what they calculated unless I’m missing something In null-hypothesis significance testing, the p-value[note 1] is the probability of obtaining test results at least as extreme as the result actually observed, under the assumption that the null hypothesis is correct. A very small p-value means that such an extreme observed outcome would be very unlikely under the null hypothesis. Reporting p-values of statistical tests is common practice in academic publications of many quantitative fields. Since the precise meaning of p-value is hard to gr In st...

Ah…p values are a strange thing. It’s been a long time since I’ve bothered with any of this, and I tend to forget what I don’t find important… 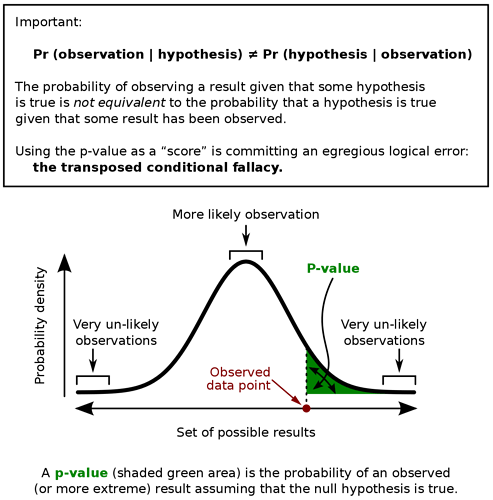 P values has to do specifically with where the data clusters, not that it’s impossible to have the data at all. This is a bell curve, right? Been ages.

" In a significance test, the null hypothesis {\displaystyle H_{0}}

, which is referred to as the alpha level or significance level. {\displaystyle \alpha }

is not derived from the data, but rather is set by the researcher before examining the data. {\displaystyle \alpha }

is commonly set to 0.05, though lower alpha levels are sometimes used."

The difference is that this graph shows you want a higher number, to be closer to the peak of the bell, a lower number is where p values “become significant”:

Loosely speaking, rejection of the null hypothesis implies that there is sufficient evidence against it."

Yup, I remember reading stuff about this years ago. 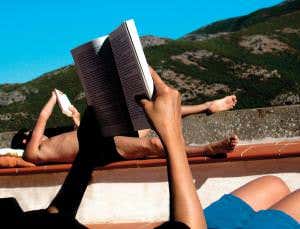 I think these studies all started back in 2012 when Lisa Cron published her first book, the crux of which she states in her TED talk: that when we read books, our brains react as if what we’re reading about is actually happening to us.

She also states in her TED talk that all fiction novels are character driven, so the problem becomes how we define literary fiction. To me, it’s only litfic if it’s deep. ¯\_(ﭢ)_/¯

5%/0.05 is already a very generous threshold—one could claim a paper seeking to make a bold claim should really be using 0.01. That exact choice of threshold is not the only flaw apparent… IIRC their significance thresholds showed that a lot of other genres and styles of writing also had statistically significant effects, which isn’t the best message to support the claim of lit fic being supreme in this regard. I can’t say I’m completely up to date with everything in the world of statistics, but if I know enough to be licensed to teach AP Statistics, I’d sure hope I know something.

Edit to confirm: I know I said it before, but I wouldn’t put much stake in the results—and even interpreting them as given, one could argue short stories have just as measurable of an effect. That’s not to mention how self-reporting genres and psychological states, especially asking people to estimate what they believed as kids, is difficult to justify.

It was more to make sure I was understanding it clearly, and hopefully so that more people who don’t do this depth can understand what’s being discussed.

Seriously, most conversations don’t cover this variable by name. Most people aren’t looking at the direct plot points before a graph is made (and frankly, most of us who did were just poking things into a computer or calculator ). That and so many explanations are jargon. It was, “How many links do I need to poke before I remember this?!”

I mean, I took 1 class on introductory business statistics, to kill time in college. That really didn’t get in depth with it, and whichever highschool course worked on the big calculators really only worked on plotting the scattered points for like 2 weeks.

This does not a master make.

But I get wanting closer to 1%. Honestly, if it was expressed as 5.2% instead of p=0.052, I probably wouldn’t have had to go look it up. I mean, that should have clicked when I wrote “bell curve”.

Aaaaanyway. Take the caveat that a lot of genres can produce similar results. That’s fine. Legitimately, we are hovering at least 25% functional illiteracy in the adult population (any stats on that are about there, US Census included). (I care less that Karen is reading lit fic and Chad is reading scifi and how complex their thougts are when Old Greg hasn’t even touched a book in a decade and might melt like the Wicked Witch when he does.) The idea that the quality of the work producing MORE of the divide that already exists between readers and non-readers is what that worrying over exclusivity would cover.

Basically, I wouldn’t have approached this with “only lit fic” in mind, in the first place.

That being said, the closer to “real world” a story gets, the less escapist it is, and the more informative it is, I assume that’s what this is aiming for? I suspect that autobiographies would be a stronger correlation than scifi (outside of psychologically derived speculative fiction), for example.

This one had me pause, though. I’m wondering what question was asked (because no, I’ve not opened the PDF yet). The way this reads on the surface is pretty counter-culture to the experience I’ve had with “educated readers” for the past decade at least, so I would love to know if this means what it sounds like…

With the schooling, I think everyone reads both. In fact, I think that people who only read what school gives them, in other words, people who don’t read casually, probably only read the best of the literary fiction their language has to offer. I have my doubts that they are made particularly open-minded via that. Also, early in life… I know my husband thought Autwoods’ story they were giving them in school about a woman overwhelmed by caring for her elderly parents complete bore, but late in life found the memories of it more relatable, when dealing with the same problems. Personally, I found that as a teen liked general fiction, but now I want adventure, because I am overloaded with life experiences and world weariness.

I think young people nowadays arrive to that world weariness stage much, much earlier thanks to living in the middle of it all since birth pretty much because media saturation.

Autwoods’ story they were giving them in school about a woman overwhelmed by caring for her elderly parents complete bore, but late in life found the memories of it more relatable, when dealing with the same problems.

That’s another problem completely, but speaks to “cart before the horse” actions.

It suggests some of the data in the study isn’t the result of reading lit fic, but because those changes have happened, lit fit is more desirable…

That’s not something that can easily be checked in a questionnaire style study. I doubt most people would remember when and where the shift happened for them.