Just a thread where you can show off the map you created or had created for your story or whatever.

Feel free to comment on others you enjoyed, or describe your own for context.

Here’s my most recent creation which I’m super proud of. 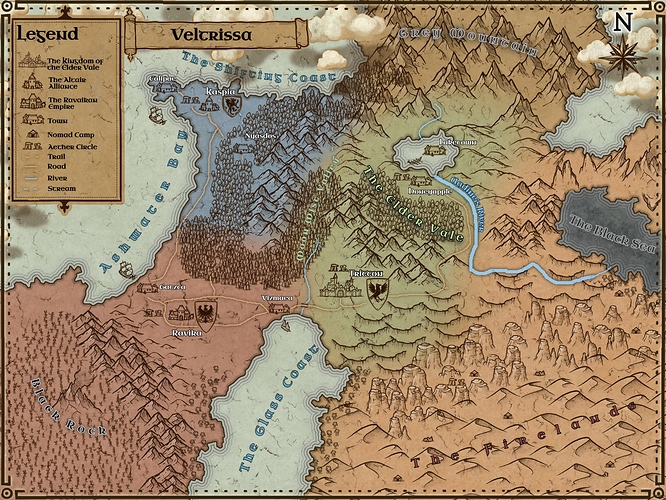 Veltrissa is one of three continents on a moon world that orbits a larger celestial body.

The indigenous people of Veltrissa’s various regions share a common history with slightly differing details in which their ancestors came over to this world via the Aether bridges scattered across the continent.

Aether is believed to be a diety, and is the parent world to theirs. Aether is also home to the Eidolons, beasts that can be summoned and bonded to their Summoner via the gates.

It is common practice for people to summon Eidolons to assist them in their day to day jobs from hunting to herding, etc. However, summoning does not come without risks as is evidenced by the many beasts that roam the wilds of Veltrissa.

If one is unable to handle bonding with the Eidolon they summon, the beast will come across the bridge feral, and depending on its nature, could become hostile.

Some feral yet benevolent beasts are regarded as gods. Uadine is one such God for the people around the lake. As they believe Uadine brings good fortune to fishers and controls weather. While not all this is true, Uadine is docile and does grant favors to those who bring the proper offering. Depending on its mood, it will even influence the weather in favor of those who make an offering.

Many other beasts similar to Uadine exist in their prefered habitats as well, and are regarded and prayed too respectively by those living in or near their domains.

The three major regions are generally peaceful, but cautious of the other kingdoms. Travel and trade are only permitted to neutral merchants and the nomads of the firelands as peace between each region and Ravika due to Ravika’s generally waring and harsh culture. Tritton and Kaspia are mostly peaceful to each other due to the large expanse of wild lands and a mountain range between them, acting as a natural deterrent to both sides to invade.

Tritton controls a highly fertile land with various endemic flora and fauna used as exports for food and luxury alcohols, including the highly sought after honeyapple brandy.

Ravika, with its mostly arid and desert like climates, is a nation built on the ideals of the strong eat the weak. Kaspia and Tritton can not match Ravikas brutal strength in their warriors, but maintain a frail peace through exporting desired goods, and mostly praying Ravika decides not to invade for greed.

The Firelands contain tribes entirely nomadic and differing in culture between each one. There is no political structure governing all of the tribes, and most keep to themselves wandering the vast deserts and oases.

Here’s my most recent creation which I’m super proud of.

You should be - it’s great! 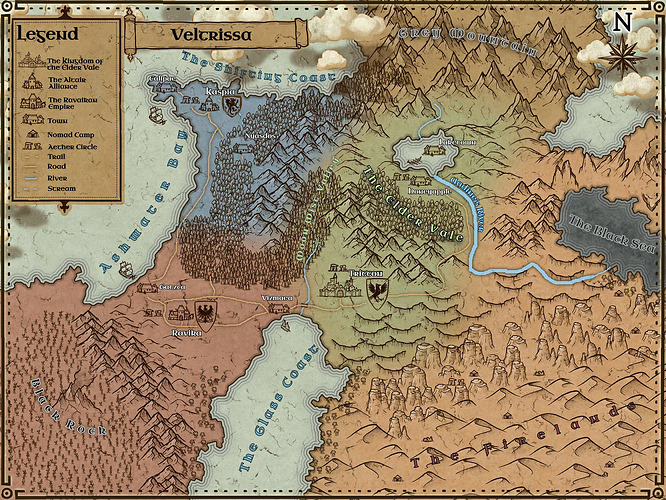 Why does this remind me of Europe, lol? Like the blue part is where France is, the left corner is Spain and so on …

You’re not the first to comment it’s likeness to Europe. I’ve had a couple people on a map making subreddit say it looks like France. Probably because of the western coastline.

The bay and peninsula looks very similar to the France/Spain Bay of Biscay and Pointe St Mathieu.

Kind of an interesting coincidence since the landmass was randomly generated based on a water to land ratio.

Probably because of the western coastline.

Kind of an interesting coincidence since the landmass was randomly generated based on a water to land ratio.

I was about to tag you…

Did you use incarnate to do this? It looks super pretty!

Thanks! Yes, I did. The pro version and the parchment features/textures to be exact

Wow that’s an amazing map! What did you use to create it?
And all of that worldbuilding sounds divine! I want to read that book now (I’m a sucker for worlds)

Here’s a map I made using Inkarkate 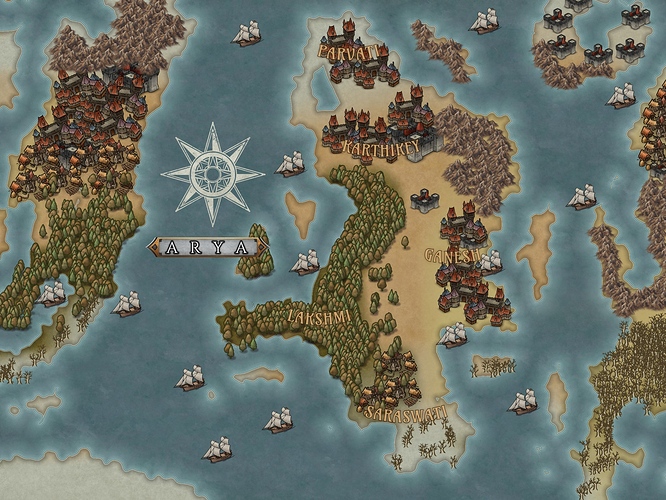 This is another map I made using Autodesk Sketchbook and a tutorial I found:

Wow that’s an amazing map! What did you use to create it?
And all of that worldbuilding sounds divine! I want to read that book now (I’m a sucker for worlds)

Thanks! I used Inkarnate Pro to make it.

The story is a passion project atm, and I made this just to keep track of where things are, but it’ll probably go on Wattpad when and if I decide to post it.

Your map’s cool too! I use CAD for my job, so I only know the professional side of it. It’s neat to see it being used in other respects with different versions.

Aah okay! It’s wonderful and thanks! 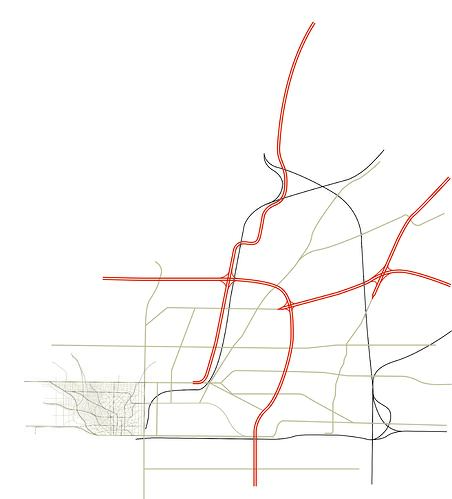 This is an in-progress map of the capital city, Corviston. The detailed bit is the old town, and the rest was mostly developed from the 1950s onwards. 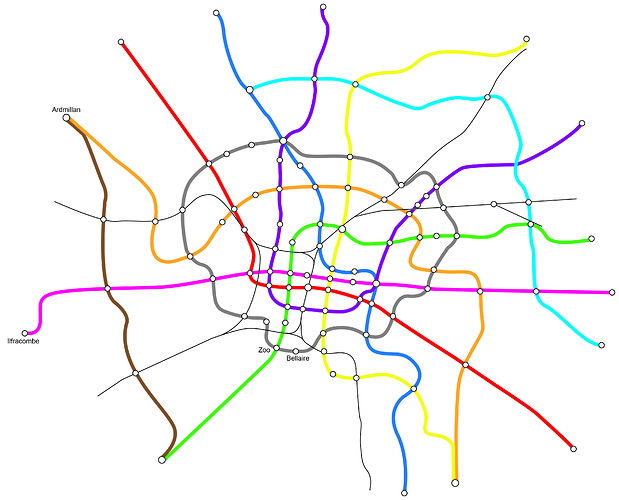 This is a map of the rail network of the largest city, Wythaven. I’m still working on filling in and naming the stations.

I love looking at other people’s maps.

This is using old Inkarnate. Idk if you can do these same things now. Also, I’m TERRIBLE at scale. No idea what I’m doing.

Anyway, it’s the map of the (other) world. The big white text is the name of the countries (Lwendolen, Parajan, Koltsland, Sensland). Small white text is names of the cities (Nimrod, Tringold, Glaid, Canviorre, etc.). Black text is the names of the trading companies that appear in the story (Quad’s World Goods, McSneed [blame the owner of the company for not coming up with a snazzier name], North Parajan Company). 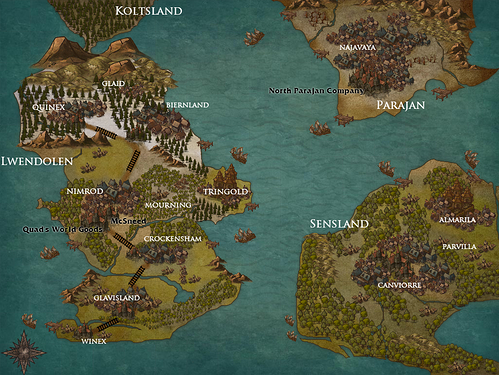 Yeah…the countries are a bit too close to each other with this scale, I think. There should be a bit more ocean between Lwendolen and Parajan and Sensland considering the sizes of those houses XD

You can definitely still do these styles in the newer version of Inkarnate.

Scales can be nice, but, as a GIS guy, scale can also be very complicated especially in this context. I never put scales to my fantasy maps because it’s usually too complicated for one thing, and two, a lot of maps that compare to the ages my stories generally take place (compared to real world ages) would be in a time where maps were still more artwork than tools for navigation. So everything on them is general location, but not to scale. Makes it more fun when I don’t have to think to hard about how big that house needs to be or how big that landmass should be compared to others, spacing, etc. Lol.

This map is pretty sweet. I like the detailed isometric types that can be created in Inkarnate, but they can also get out of hand quickly. I used to do them, the OP is the first where I went with the parchment style. This looks a lot better than any of the detailed fantasy styles I’ve tried to make!

Idk why this thread was suggested to me, but I do have something. Maybe it just… knows. 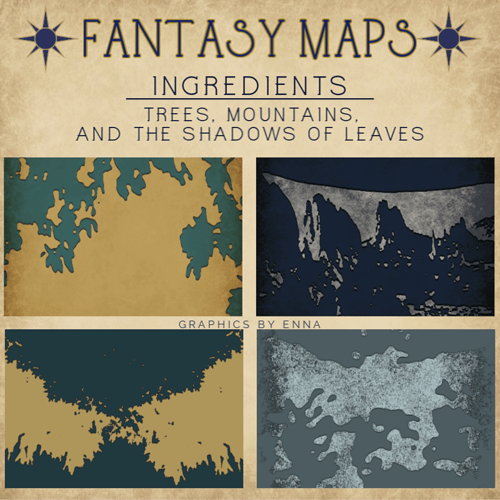 A while back, I made these out of trees and stuff

If anyone wants one of them, message me, I guess.