Never had it and plan to make a homemade version...

I plan on making a homemade yet healthy version of banana bread…real soon.

The only thing is I NEVER had banana bread…EVER. Next month will be my first attempt to try and make a homemade version that is healthy for me.

So, this is both exciting and different.
I randomly thought about banana bread out of nowhere and pretty much figure “Hey, why not try banana bread, even though I never had it?”

It’s weird that I even thought of that.

How about you? Have you ever had a situation like this? Am I a weirdo in having that random idea?

It looks yummy and tasty. I still don’t understand why I never had that or banana nut muffins. Screw that I rather have the banana bread even if it is a once in while thing. 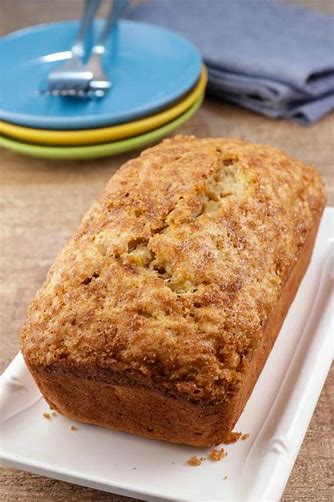 OOOOH! Banana bread! It’s so yummy! And I’m not even a big fan of bananas.

I’ve never made one before, but my sister has and they’re so good! And no, I don’t think it’s weird at all. I love trying new food, and even though I’m not big into cooking, I like trying new recipes. c:

I just found it a bit strange because I was just browsing the web and out of nowhere this thought came:

“I think I should make banana bread one day real soon, yet I’ve never tried it.”

The mind does work in strange ways lol

I’ve had similar thoughts, though, but most of these thoughts exist because I see a lot of weird food combos online. I saw one video of this guy make this cheesy hamburger hot dog thing where you take a cheese stick and wrap seasoned hamburger beef around it, grill it, and then put it in a hot dog bun. He made it look really good, and I’ve never tried something like that, but I decided to do it anyway! Unfortunately, it didn’t come out good.

I’m also into pasta dishes, but I usually stick to alfredo or something similar. But one day, I wanted to be healthy and found a recipe that was mostly seasoned veggies (onion, spinach leaves, cherry tomato, garlic; the seasonings being salt, pepper, and nutmeg) with mascarpone cheese and throw it together with penne noodles. It’s pretty tasty!

Though I should warn you, when it comes to any sort of bread, the first try is almost always horrible so be prepared to do it a few times

Though I should warn you, when it comes to any sort of bread, the first try is almost always horrible so be prepared to do it a few times

Even if I follow the directions of the recipe and get some assistance?

The mind does work in strange ways lol

Yeah it does. LOL!

It’s fun to try to make things you’ve never had before. My partner and I have been doing that a LOT.

Funny you talk about banana bread. I was just home to see my mom and she gave me some healthy banana bread. She makes it a lot. It’s a good way to use up brown bananas.

Whole wheat flour, no sugar (use apple sauce instead), and it has honey, and, of course, all the other banana bread ingredients. She’s also made one with molasses once. It’s hard to get molasses in Japan, so she only made it that one time, but that’s molasses instead of sugar. You really don’t even need apple sauce or molasses or sugar because the super ripe squishy brown bananas are already so sweet.