Hello! I’m Lynne, a veteran Wattpad designer. I dropped designing a year or two ago because I lost all inspiration. Like everyone else, when 2020 started getting worse, I quit entirely. My last official graphic was done in late 2018, but I made exceptions here and there for some folks. But, I’m here now!

I re-opened my graphic book on Wattpad, if you’d like to check it out and request on there. the form will still be posted here as well if you’d rather request on this thread.

I did make the cover myself, but here are a few more examples for you! some are recent while others are older.

» before requesting, i do ask you read the the first few chapters in my graphic book to answer any questions about payment, guidelines, and more examples.

want to request from me on here? click here for the form.

Can I request here? I tried commenting on your graphic shop but when I filled out the form it had too many characters

That’s okay! Go ahead and put it on here love! x

story title: Short Summers and Old Fires
subtitle*: A Niall Horan Fanfiction
author: Stella Vigo
brief summary: A girl thinks she’s going to spend an ordinary summer until she bumps into her old friend, who happens to be Niall Horan.
ideas: A typography-based cover. The title is big and bold, maybe the word “and” in the title can be small and squished between the other letters (or it can be something else, whatever you think looks good). The title can be just one big sans serif font, but if you want you can have “Short Summers” in that bold sans serif font and “Old Fires” in a swirly/cursive font. The background is a plain and empty beach, preferable facing the sea. I’d prefer if the beach background was during the morning/afternoon, and not sunset/sunrise. The author’s name can be small while the subtitle can be a little bigger. If you want to put a person on the cover, you can put a vector of the female character. She has brown hair, green eyes, fair skin and not-so-noticeable freckles (you don’t have to include the freckles). If you want to include her, you can put her in a way that she’s sort of blocking the title (it’s the first two links under the inspo)
images*: n/a
inspiration: https://i.pinimg.com/originals/c8/87/38/c88738b4eadb284b7924e96c53075166.jpg or https://i.ytimg.com/vi/xhiBt2CSURc/maxresdefault.jpg for if you want to include a girl, like how she’s partially blocking the text. https://images-platform.99static.com//8DNpaDD4ywq109Pzx0sIMvA_ovg=/135x132:1831x1828/fit-in/500x500/99designs-contests-attachments/94/94899/attachment_94899703 or https://disabilityinkidlit.com/dikl/wp-content/uploads/2016/06/cover-for-formerly-shark-girl.jpg is what I’d like the cover to be like
color scheme: bright colors that are not bold, except for maybe blue (because that’s the color of the sea). I’m thinking lots of white, blue, sandy colors, maybe fiery orange for the word “Old Fires”
mood: relaxed, summer
anything else: Though this is a fanfic, I don’t want the celeb’s face on the cover at all

accept <3 I have one person ahead of you, but you should have it soon!

Thank you so much sweetie! That means a lot❤️ 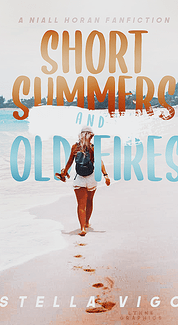 thank you so much! I’ll use it immediately

Thanks for requesting! Come again!

Hey, hey these covers are gorgeous! I’m working on a piece of flash right now…was just about to request a cover but then realized I haven’t thought of a title yet. I’ll get back to you when I find a title

LOL! I will be right here waiting!

wanna see more of my stuff? check out my DeviantArt @ theoutlandish!