Ohhh okay, I’m excited to see this in full colour! 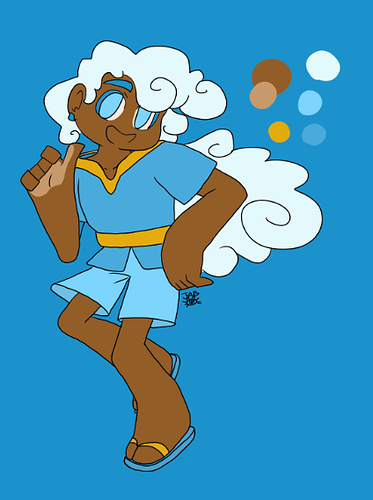 sorry for the late reply!

The shade of his eyes are so pretty!

Certainly goes well with the rest of him!


My patience running thinner on this melting clock
Cerebrum jailed with thoughts, most would consider rot
To think you're any different from an animal
A creature sick as you should be put down
But I can't help myself


Please, don't hide your imperfections nature
Took two tries to make the man in white
No, I don't mind, you are a beauty
Not temptation, you're my creation


the memory of the tears that had glimmered in her eyes, of the way her lips had trembled and she had shaken like a leaf as she begged him lingered in his mind, etched onto the backs of his eyelids.


he wondered what was there to tell. what could she possibly tell the authorities? that the man she was married to, that the brilliant intellectual she slept with, was a monster? the devil himself wearing an angelic face?


but did it really matter, when all she had been hoping for was that he would understand? understand exactly what he was doing to her, to her heart, her mind, her body. her soul.


he'd been tearing her apart.


that thought broke the dam.


his knuckles turned white on the steering wheel as he brought the car to a skidding halt, tyres screeching at the sudden movement. tears brimmed at the rim of his eyelashes, catching on the edge of a jet strand before sliding down porcelain skin stained red.


she had no right. none at all to accuse him of being such ... of doing such ... of ruining her. he was her salvation. and she'd been too much of a fool to understand that.


he slid out of the sleek sedan, crisp shoes crunching over the gravel as he made his way around the car, to the trunk. as he clicked it open, the soft, muffled sounds of his pretty wife's cries reached his ears. he stared down into her fearful face; pupils blown wide in fright, golden skin pale and slick with cold sweat.


oh, she was utterly marvellous. it was a shame though that he had to get rid of her. she was truly the best he'd ever had.


butt here would always be others. and she knew she was always expendable.


"please, please don't do this. I promise I won't ever say anything again. please, I - I love you!" she croaked out desperately, clinging onto him for dear life as he cradled her against his chest, walking them over to the edge of the bridge. he blinked at her, before staring down into the seething, swirling foam of water that roared beneath them.


"oh, i know, darling," a sharp smile sliced over his lips, and then down she went, tumbling into the churning darkness below.


he whistled softly as he slid back into the car, dabbed at the blood seeping out of the cut on his cheekbone. dark eyes stared back at him in the rearview mirror and his reflection began to weep.


"shhh," he breathed, taking joy in the pain that swept over the chiselled features mirroring his own. "this was the deal."


ignoring the pleas that strummed through the silence, he gripped the steering wheel, driving the car down the smooth road, watching as the city flashed by.


"this reality will fade away for you soon enough."

okasjdfs girl physics and chem are killing my soul

Chem’s alright for me but pyhsics …

it’s been slow - poisoning me for over a year now

it’s been slow - poisoning me for over a year now

Physics has always been a love-hate thing for me. xD It brings me the most pain but also much inspiration. I’m doing chem right now… it’s not bad but I don’t like it as much as chem last year.

I don’t really have a choice considering that I have my national exams this year and, being a science student, attempting liking these subjects are the only way forwards!

Oof, good luck!! That’s probably true. But do you like them? Even a tiny bit?

Like when I get to watch magnesium burn, or play around with light optics

@FourcedowErsert @TheMidnightAssassin @NotARussianBot @wednesday
How was everyone’s day? I spent the whole day talking and my brain’s fried as this point

My weekends and free time are all gone.

I still have free time. I’m using this to think about what in earth they’re mining in the Chilling Adventures of Sabrina. Because it’s either invisible, very clean to extract, or these guys are the cleanest coal miners on television.

And to make it even weirder, it seems to be based on New England, but New England doesn’t really have much of a history of mining.

If they were just haunted mines that brought in a lot of tourists, I 'd have no issue.

Oooh, you do debate?

I have a cousin who does it so I know a little bit about that (I can not talk in front of crowds O.o)

What was it about?

I’ll have to check this out sometime