What happened? What is going on in the last chapter you've written?

Where ever you left off on the last chapter you’ve written, tell me what happened?

I am curious to know what is going on in the last chapter you wrote. If you got spoilers, then feel free to hide them. Even if you are not finished with the chapter, I still wanna know what happened where you left off. You can use this thread to continually post what is happening in your story’s chapters.

Try writing it in this format.
I am going to use my story as an example on how to do it.

What happened: From what I have written, Demetrius who is the Prince of Kenorland is at a party thrown by his family during the time of a brutal war. He is a bit bored till his close friend Knox appeared and the both of them started chattering to each other. Even while two women came trying to mingle with Demetrius when he prefer to spend time with his best friend. I end off where Demetrius sits alone in the ballroom where the party was held sipping water and thinking to himself. He is conversing with his younger brother who mentions that his Demetrius’ twin sister is away in another country doing something. That causes Demetrius some worry.

What about you all?

The Endurlon:- Chapter XI From Darkness into Exile.

Previously I had mentioned that Geldrid and Hal-en had met with Ossel of Acoss. They fought off a Horde of Dugaalion at the small Garrison upon the edge of the Kilvien Mountains. Since then Geldrid has wandered into the eldest settlement of Arillion known only as Heldredth. Mysterious and unknown by many. It is avoided. Passing through the shrouded vale which fully surrounds it, they were endured to an enchantment which preyed upon their minds. They entered and walked amidst the walls of unknown. Found an ally of the old wars, and discovered a little more of themselves. This happened within Chapter X: Hedredth.

Chapter XI: From Darkness into Exile.

I’m about half way through… Having been released (with help) from the dungeons of Greyridge, Riona being assisted by Kelbis, have made their way through the forgotten ways underground, towards the exiting to the far northeast of Antul (the lands of Hastofen). Only the last gate stands before them and the light of day. Once out they will emerge upon the northern borders of Antul, and face the eastern ward of Uprul, and the lands of the Erinnid Elves (Known as the Estvarl Elves in their tongue). They have no liking for Dwarves, and Kelbis fears this, but Riona is one of their lost kindred, and they fear the darkness of what she may bring with her…

Chapter Nine: The group of seventeen royal siblings have arrived at the castle, spent a few days, and are preparing for the first ball of the season where they’ll be shown off to other royalty and the public for the last time before The Physicals, a survival battle in the wilderness.

They’re a couple of weeks from having one of them chosen to be the ruler and things are tense. It’s been twenty years in the making.

The ball is full of dancing, watchful eyes, and wooing the public. And unlike the second ball, everyone survives this one.

Some messed up shit.

Tear In The Megaverse Chapter 25
Leo, Nikki, Colt and Bast find their way to the dead galaxy of Hetsipara (it only took five books for its first in-book appearance!) to find Death in the hopes that they will know a way to the Void to rescue their missing friends. The only problem is that the galaxy isn’t as dead as they were led to believe

The Young Ones Chapter 9
Hathor struggles to come to grips with her new Time Magic, the teachers struggle to help her as no one else is known to have the power. Hathor questions all the bs that got her to this point and basically has a big fml moment

Queen of Darkness Chapter 25
The battle for the Academy continues as our villains are revealed, only it turns out a thought-to-be ally is helping them. It’s almost time for the true reason behind the attack to come into light

The group of seventeen royal siblings have arrived at the castle,

I think I read that wrong.
The group of royals are seventeen years old, right? So, why on Earth did I mistake it for a literal group of SEVENTEEN royals? Meaning I thought that it was an actual group of seventeen people.

I made my own notability template for a quick character sheet. It’s super basic but I’m really proud because it was kinda difficult to find anything online about how to make them. So whoo hoo! haha 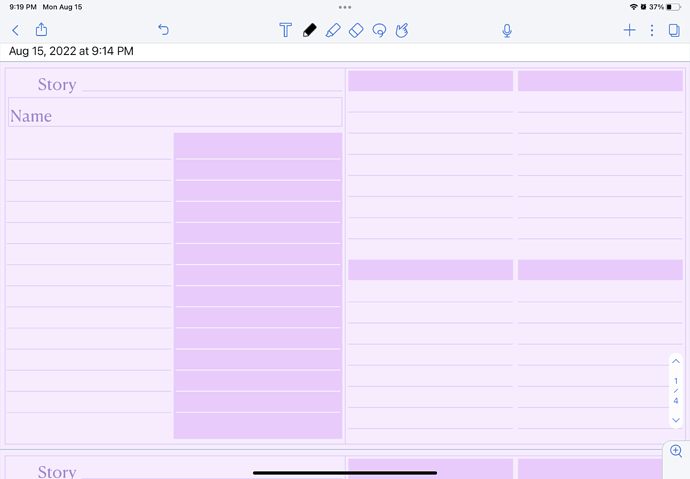 Chapter 9: After Errol gets stabbed with an iron dagger by his own adoptive sister, Nattaleah, he narrowly escapes her. With nowhere else to turn to, he returns to Malachai’s house for help, where Malachai’s sister, Desiree, helps him heal. He passes out for a time before coming to and going downstairs to see Desiree and Malachai discussing what to do next. They are normal humans and don’t have any idea how in over their heads they are. Errol wants to just leave but they are adamant about helping him.

Meanwhile, Errol notices Desiree’s daughter, Olive, isn’t there and asks where she went. They thought she was outside playing but look out the window and don’t see her. Desiree goes to check and hears their dog barking from the woods nearby. In a panic, all three adults run into the forest to find that Nattaleah has taken Olive hostage and wants to exchange her for Errol.

Errol hesitates to sacrifice himself for the little girl, and Malachai forces him forward to save his neice. Nattaleah releases Olive and exchanges a few words with Errol before she’s about to kill him. Errol uses a spell to knock her down just before she can use the iron dagger for a fatal blow. While Nattaleah is recovering, Errol rounds up Olive, Desiree, Malachai, and even their dog, to teleport them somewhere else. The chapter ends there.

How do we feel about aging up all of our characters suddenly after three years of planning? I’m taking them from all under 20 (mostly around 15-18) to under 25, aging everyone up a few years. Now they’re around 17-25. I thought it would help my story grow up a little and keep me from falling into typical young teen drama.

I have to know everything about everything in my stories. While it’s cool to have, most of it is never going into the story and adds years to my planning. On the bright side, I have so many random facts that I’ll be able to excite my readers for years about their favorite things in the book.

Examples- I have a whole magick system that the reader will never know about. I know how they do plumbing and electricity in a world without machinery. There’s a spice trade route that has no reason to exist in my story. There’s a whole historical war that might be mentioned once.

Well, the war does help with the racism but I wrote too much about it for it to only exist to create racism.

That sounds cool. Do you have like an internal story Wikipedia?

The spice trade route sounds cool, to be honest. I’d go on that. I like my spices, though.

It’s good though that your story’s war expanded to more than an allegory in a sense–it’s part of the story’s history now?

For Julio, he came after Max, who was my original OC, but Max is getting his own story. Julio started out as a kinda annoying teenager, but he expanded into something more. I discovered he could take to ghosts, and it went from there. Max still thinks he’s a bit insane, but he means well.

I like Max and Julio’s dynamics, but I don’t want them to be shipped together

They’re just good friends; Max has Teo and Alicia (long story), and I guess Julio is still looking for ‘the one’.

It’s an important part of the story that really changes how the world was put together and interacts but the war itself isn’t in the story. It like, looms in the way the world works. But I have the war written out.

It’s an important part of the story that really changes how the world was put together and interacts but the war itself isn’t in the story. It like, looms in the way the world works. But I have the war written out.

Wow, that sounds cool. It’s like it’s there in the background. So, it would be like the impact on our universe after WWII happened, but in your world? It doesn’t happen, but it’s left its mark.

I’m building my own story universe called the Churroverse at the moment.

It has the Angelverse (set in Angel Falls, my imaginary Southern Californian city and state near San Diego I made up), Flankverse (set in Ireland), Lioverse (set in Barcelona), and the Vumpverse (Vampires) and the Wulfverse (Werevoles), which are urban fantasy subsets in the Angelverse.

Julio is from the Angelverse.

Wow, that sounds cool. It’s like it’s there in the background. So, it would be like the impact on our universe after WWII happened, but in your world? It doesn’t happen, but it’s left its mark.

Oh yeah even worse. All the separate countries join into one empire vs another. A whole race becomes hated bc they joined without helping out the military since they were peaceful. So now ppl call them all cowards. So now the entire landmass besides two small islands are now one empire. A new family created it and now rule. The old rulers were killed out.

Title: Empire of Lies
Chapter Title: Threats over letters
What happened: Sara is trying to find out what a certain letter is about, but it backfires when the person delivering the letters is killed because of her enquiry.

Harris agonizes, which pretty much is a content of every chapter.

lol, okay, he is given a clue, finds out there are randos on internet who still ship him with Ablaze and agonizes over not being able to fly to Singapore, 'cause he’s broke. He also reveals to his dad just how broke they are.

Chapter 10 (I lied last time, it wasn’t 7 it was 9):
Errol teleports Malachai, Desiree, Olive, and their dog, Sadie, someplace away from Nattaleah. He knows she won’t be far behind them though and tries to tell the others to go find a safer place to stay for a few days and lay low while he splits from them and makes his own way. Malachai doesn’t trust Errol anymore and wants to be rid of him for putting Olive in danger, but Desiree insists on Errol staying with them so they can help protect him from Nattaleah. Olive also wants him to stay. Malachai points out that Errol appeared to be willing to sacrifice Olive to save himself and Desiree asks if he was really going to do that. Errol assures her he wouldn’t have let Nattaleah harm Olive. In the end, Desiree trusts him and tries to talk him into staying with them again. He is about to decline when Olive pulls at his heart strings and convinces him to stay with them while they find a safer place. He feels very guilty though, because he had lied before. Errol would have sacrificed the little girl to save his own skin.

in my upcoming book, my main character is attending her best friend’s wedding