What is the meaning behind your main character's name?!

The title speaks for itself, folks!

I named my male protagonist “Ryker Atlas” because when I think about it I stole the name from Riker Island Prison in New York. Because Ryker has always felt like a prisoner in the High Order(still plan on changing it to something else…maybe). The High Order is an extremist religious organization with rather unique teachings and evil schemes. Yet Ryker wants to be free from the prison which he deems The High Order to be. The surname Atlas comes from him yearning to see the world or rather see the world in a magical sense.

See…Ryker is completely blind, but he can “see” the world through magic vision. Without the magic vision, he is 100% blind, still blind with or without magic. It is just his magic powers helps him see the world somewhat clear.

I would mention Lilianna Florentine, but I only chose her name because I thought it was cool and cute.

But what about you all? What is the meaning behind your main characters’ name?
Let’s chat about it!

EDIT: I apologize for making this thread again. I am starting to run out of good forum topics to make.
Bummer…

Pretty sure you already asked that.

Volya and his two sisters, Nadezhda and Kramola have names that translate as Will/Freedom, Hope and Dissent. In combination with their last names, it becomes ‘of the Wolves’. So, Volya Wolkov is Will of the Wolves, etc.

Pretty sure you already asked that.

It probably has been a while and I am running out of new forum topics to make. LOL!

Volya and his two sisters, Nadezhda and Kramola have names that translate as Will/Freedom, Hope and Dissent. In combination with their last names, it becomes ‘of the Wolves’. So, Volya Wolkov is Will of the Wolves, etc.

I like this. Very cool and creative. The names are so pretty especially Volya.

I just picked Max cause it sounded cool and it fit his personality. And he doesn’t take crap from Julio. 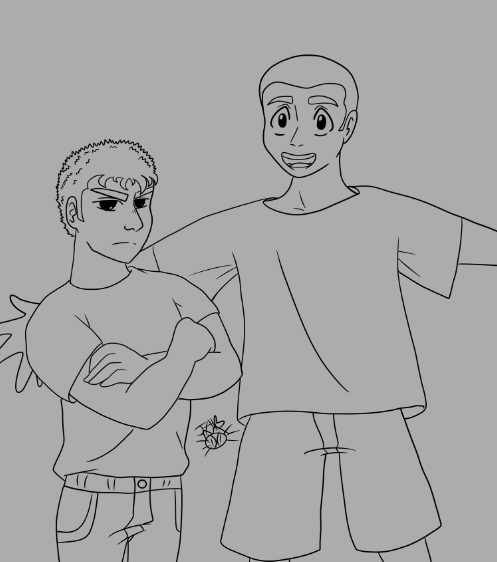 (Yes, the very talented @NotARussianBot drew this. Thank you.)

That drawing is so cool and cute.

It probably has been a while and I am running out of new forum topics to make. LOL!

You’re not under any obligation to open new topics, right?

I rarely choose a name for meaning like that, although I do enjoy it when they are obnoxiously done (as I’ve said elsewhere).

But with some made-up names, I’ve had meaning.

Esme, Althalos, and Thalosine from To Make a Kinder Children’s Tale are names of meaning in a society that doesn’t believe in focusing on names.

Althalos is All of Thalos. Thalosine is Son of Thalos. And Esme? It’s central to the story, to me, so you’d have to read it, though it’s simple. And yes, Esme is an Earth name, but I didn’t keep the Earth meaning, in that story.

Athelai and Broadside in Broadside is names given to a woman who was never given a real name. Athelai is what the ML calls her because he loved the name, and Broadside is because her opponents felt like they hit the broad side of a barn to fight with her. There’s also the name she gives her construct-child, that I can’t remember right now, but it’s supposed to mean something.like wanted or much loved because she was not.

Well, no I’m not, I just don’t wanna repeat things I suppose.

I did not choose Sara for it’s meaning. But when I looked it up, I realized both Sara and Malika’s name mean the same thing - Princess.

I never picked any of my characters’ names. Believe it or not, I stare at them in my mind and ask them to introduce themselves. I hate some of the names but don’t change them, I like to keep some realism in my stories and share the readers’ feelings when they discover them. I’m never just the author, I’m also a reader eager to find out what happens next…and it all plays out in my head. I just put words on what I see.