What Supernatural Can Learn from Ed, Edd, n Eddy.

Consider this a call to watch tv shows that have nothing to do with your main concept. There is a lot to gain for writers who write “serious” works to watch “unserious” shows. I’ve told this to a couple people already and they all seem to agree with me.

Motivations: Giving your characters a motivation beyond “defeat the latest bad guy” makes your job easier! Alongside a long-term goal, like “scam the neighborhood kids out of their money to afford giant jawbreakers”, you give your characters core motivations like “have fun at every turn”, “a fool and his money are soon parted so what is the harm in parting them?”, and “make sure that we don’t get caught or killed”. If I had the choice, I’d much rather write for Ed, Edd, n Eddy because you can come up with plots far more easily than Supernatural after a few seasons, though part of that might just be because the antagonists aren’t constantly replaced.

Don’t be afraid to give your characters less-than-noble motivations, it makes them more real.

Personality: Always go for a strong, easy to understand personality, at least to start with. Add depth over time, of course, but something strong and easy to grasp is better for your audience, actors, and writers to “get” a character’s deal.

Diversity: The fact that a Cartoon Network show released in 1998 has a more diverse supporting cast than Tumblr’s favorite demon-hunting show is a depressing fact that says a lot about the society we live in. Not everyone save for your main characters should get killed off-returning characters can have great stories and you have options other than death to write a character out of a story.

It’s Funny: Well, duh, CW shows are rarely funny, and when they are, it’s always accidentally. In the words of The Joker, the second-best Batman villain “Why so serious?”

The only possible option for Eddy that I can tell is probably John Winchester but I am not certain.

Their surrogate father would work.

Great ideas all around

i’d hardly call supernatural a serious show, i mean yes they try to be serious and have their extremely dramatic moments, but they also poked fun at themselves ALL THE TIME. there was a whole arc that was basically about breaking the fourth wall but inside their universe and it was weird but fun, i guess.

anyway i thought spn was good, it had great moments, moments of great storytelling, great characters, etc - obviously still had many downfalls though. i agree about the whole killing off characters thing - so many good ones killed off when it wasn’t necessary. was gross. but oh well

Even if Supernatural wasn’t serious, a lot of CW shows lack a sense of humor. Riverdale anyone?

never actually seen riverdale, it does the opposite of interest me tbh, so i have no idea how serious or unserious that show is supposed to be

(isn’t it… a musical?? i don’t know if i’m remembering that right, but if i am, i absolutely hate it)

i’ve only seen a couple of other cw shows, one of which is Dynasty and that show is a good time. it is so stupid but i think in a good way, really entertaining watch tbh (and elizabeth gillies, main lead, is hot and i enjoy seeing her lmao)
aka i’m saying with what i’ve seen of cw theyre fine at humor imo, but i also avoid a lot of shows like the plague (ie riverdale) so i’m probably luckily missing out on really shit shows tbh

Riverdale started out talking itself seriously, but even when it got crazy, the writers treated it very seriously. It’s like Airplane! in a sense, but it never admits that it’s a comedy, meaking it weird.

A lot of stuff aimed at teenagers has the same problem.

A lot of the writers on this forum struggle with comedy more than any other genre, likely because they don’t see the funny side of life.

oh god don’t like that - refusing to embrace the image you’re clearly outputting just makes it even worse?? supernatural embraced they were cringe sometimes, that’s what made it bearable for me for so long tbh.

but the fact it’s a show for teens makes it make more sense, though. a lot of stuff aimed for teens ends up being kinda cringe.

i’ve never had an issue with comedy personally, but that could be because my life is a joke

Ah…why am I on the other end of that, trying to strip the insanity out of things? Don’t get me wrong, I don’t write the funniest things in the world, but my irl quips are how I think when I write, so that personality wants to break on through, making my writing like Cthulhu Family Circus: 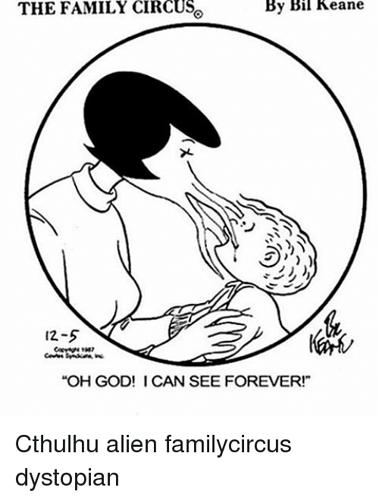 I also seem to have taken a Garfield approach to comedy: keep doing the annoying thing until it is funny. That can also take the humor out a situation, at times.

But it’s like writing the end of that Final Fantasy movie, and instead of getting a hands up from those who passed before, it’s a bumblebee to the forehead where the last thing through it’s mind is it’s ass, and the resulting anaphylaxis balloons Cloud’s mass up into pushing himself through his sword strike…and suddenly it’s zooms out to the globe and the resulting explosion is a mushroom cloud the size of a tiny zit…with a wet fart noise.

And then there’s the therapy session for “why did my brain do this?!” right there…

You don’t take yourself too seriously, that’s why. It’s a gift.

If I took myself seriously, I’d be the most arrogant one here. Lmao

But I do need to write something where I let that go, see what it’s end is like.

Really interesting, and I agree 100%.

I like to refer to it as the death of comedic relief characters. Nobody does them well. Every character has to be witty and sassy.
Edit: by ‘nobody does them well’ I don’t mean to generalize. I just see a lot less of good comedic relief characters in modern media. Like Marvel movies where everyone is just so witty and funny. It can be fun for a time, but it’s in nearly everything now. Like, a character can’t ever look bad.

Why in cartoons, it feels like villains can be embarrassed why continuing to be terrifying. The comedy aspect only humanizes them but doesn’t actually take away from their character. (By this I don’t necessarily mean a villain telling jokes, but like even slapstick/physical humor can be good).

I feel conveying humor is hard for some writers (me included) because not everyone gets or understands the things that others might find hilarious. Everyone’s humor is different the same way everyone overall is different. I feel like when it comes to humor in fiction it can either be a hit or miss for most writers…and readers.

On a side note: I feel like watching little clips of Ed, Edd, and Eddy now. LOL!

Comedy is relative and subjective, so it’s difficult to structure it, but I think the main problem is knowing how to insert comedy into a work the author takes too seriously.

That is true.
Sad to say, I don’t even know if I have a comedic moment in my story. It was too serious, and I hardly write comedy in my fiction. Mainly because I don’t know how to toss it in there without it sounding force or at the very least, when I clearly come off as unfunny to someone.

Humor is somewhat strange to me.

Humor can be difficult.

I usually try to keep around a more light-hearted character who can tell jokes and include humor for my more serious characters in physical ways.

Like, as an example I just wrote this scene where my MC eats absolute shit why skiing, gets snow and mud all up her nose, blood everywhere.

And yet it’s funny. The image of her sliding across snow, face-down, her face being dragged against it makes me laugh.

It won’t make everyone laugh, true. But in this case, the “humor” (or at least the act of her eating shit and embarrassing herself) serves to humanize her a little bit and takes her down a peg. She’s still a badass, but she also still falls flat on her face like everyone else skiing for the first time.

It makes me like her/relate to her a little more :).

How did you even manage to have her eat actual poop while skiing?
Did I even read that right? LOL!

Humor can be difficult.