Ask me about my WIP. And you get to choose what kind of question you want me to ask you.

That’s the longest title for a thread that I’ve ever made. Basically, ask me and I ask you.

I need to talk about my story to feel like writing it, so, thought I’d do something about it with you guys. I think we can use this to inspire each other, too

BUT you get to choose what kinds of questions you get from me.

After you ask me a question, choose 1 or 2 or 3 or all of the types of questions you can get from me. You can come back as many times as you want. I might throw you a curve ball if you come the third time because third time’s the charm, as they say

You guys can make me repeat myself. Don’t worry if someone asked the same thing. You don’t have to check the responses. That’s a pain in the neck

I realized I’m relying on the first person to ask a question out of the blue.

My WIP title is in the bonus tab.

I have talked about MC Sovanna being lionkind before but mentioning it again anyway.

Uhm… and I call it my lion girl story.

Ok, how lionesque is she?
Any.

A place where you fight (Battlefield) (most recent thing I’m playing with).

Can you make a tierlist from S+ to F of your characters based on power level?

She’s a bipedal lion girl. The only none lion parts are that she walks on two legs, has five fingers (opposable thumbs) and toes, and can speak and write. The rest, she has a lion tail, eyes, ears, nose, has fur all over her body covering everything, she has pawpads, fangs, a scratchy tongue, whiskers… and she’s a raw food eater most of the time.

Q: What’s the inspiration behind your story and how much does that inspiration affect the plot?

I had to look up what that is and realized I’m super familiar with it XD Every YouTuber ever has done one of those.

I’ve never ridden the tier list trend so bear with me.

Power level in Elgana is usually by magick, so I’m going with that.

Btw, who’s your new profile pic?
Question for your characters: Do they like bananas? How do they eat them?

Inspiration behind the story was a chance for a man to propose as if he was a bold woman of an older era. I grew up on Regencies, so I get not only the thoughts on women’s rights in that era, but also their implications: sometimes from me thinking through the worldview’s limits or sometimes from reading a brilliant author. And that’s stuff you have to get beyond the “sHe’S dIfFeReNt” that allows the heroine to be a bluestocking (bookworm intelligent, equal of educated men) in an era when a truly smart woman may pretend to be dumb. It’s not like this is the Victorian era when where such women were put on a pedestal or chronically challenged like an equal while being looked down on, even if you wouldn’t personally want one as a wife.

It really was to just play around with that alone.

I’m a pantser, so this thing is likely to work like an uncontrolled fire hose. What I run the risk of is this thing bogging down into being a romance, which I really don’t want. I could have put this towards the end and done a slow burn, but then it’s a romance in a fantasy setting.

So the restraint is that this starts out as the tail end of these two’s time in the military, where their civilized status means nothing, and as she’s contracted through him, when he retires, so does she. The things that this proposal does is fortify his status and a barrier from some court intrigue. While her status is respectable, this elevates her to his level, so she gets to go from servant to representative. I guess I’ll stick her with some resentment because she walked away from that life, while his time at war was an obligation of his status. Basically, it gets them ready for the story to go any which way, with them having each other’s back, some intern conflict. Basic fantasy action premise, that.

How much of lion behavior are you going to incorporate?
Any.

I used to have a monkey but too many people thought it was creepy so I choose an artbreeder image of my character, Cyrus, from my hacksaw treatment of Supernatural. The fandom asked for a rewritten version and they will get it, just not in the way they ever expected.

Do they like bananas? How do they eat them?

Willow the brachiosaurus thinks that bananas are best eaten with the peel on, says it’s more flavorful that way.

What is your story about? What does your main character want most in their adventure?

That’s all I got.

You could do a romcom, potentially, poking fun at the times back then from a different perspective if you feel like it. I’m also a pantser, so I get you. Nothing is set in stone, is it?

How much of lion behavior are you going to incorporate?

The part where the fight to take the leader position is a fight to the death. The story starts where the queen dies and the king takes over, but I’m thinking the queen had more power than the king as in actual lion pride the female has more power, apparently.

Those are the only parts so far.

That’s disturbing XD I really don’t like human fingers on animals, sorry. The hands are more like paws than actual human-like fingers. Females also have manes like males but males are the only ones that have the manes extending to their chins. They don’t wear clothes. They can, and some do, but most don’t. 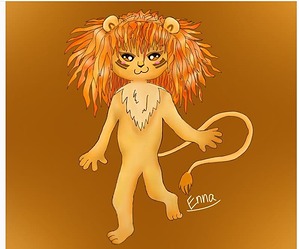 My story is about a lion girl named Sovanna whose race is threatened by an icy curse, and then the Guardians of the world decide to target her for her magick. With the help of her friends and relying on her wit, Sovanna must evade the Guardians, find out why they want her, destroy the ice curse, and save her race from extinction. She will leave her enclosure for the first time with danger on her trail.

hmm, not the best summary, but I tried.

Sovanna wants to save lionkind and bring peace to her race. That’s all she wants.

hmm, not the best summary, but I tried.

Sounds good to me.

Does Sovanna have a favorite meal that she really enjoys?

The short and bald Cajun werewolf named Joseph Wayne. His cousin Eva is right behind him, using ghost pepper seeds as personal defense.

So… Who wouldn’t eat spice? I can’t fathom writing a character who thinks black pepper and garlic burns. I have written a carnivore who hates bacon/pig because it smells like death (Sssyraine the lizard-elf), and an almost vegetarian (Dreithan, a light elf) who will become sick if offal is cooked near him…but that’s not spices.

Does your character find men are lazy until it’s time to fight?

So not quite like dnd’s Leonin or a Thundercat then.

They don’t eat a large variety of food or cook much. She does love the sweet, juicy yellow berries that grow on top of trees like parasites though. They’re called sunlight berries.