How great are your first sentences in the last chapter you written or are writing?

The Awakening Chronicles: The Breaker of Arcane Shadows | Tales of Alterra Series.

Chapter 1(I had to dive into the first chapter because the prologue didn’t make much sense at the moment):

Ryker continues to hears more people discussing the incident on what happened in the Empire of Gloriosa and how the mortal citizens fled. It seems that is the only thing people are talking about these days in the manor. The nation was attacked by a religious cult calling themselves the Order of the Rust for reasons unknown. This event caused the mortals to flee to the Shadowland of Lemlos. Even thought this incident happened three weeks ago, Ryker still has the misfortune to listen everyone talking about it like as if it happened yesterday.

That is all I got for now!
What about you? Give it a shot and see!

I didn’t enjoy tailing during my years with the Bureau or grew to love it later in life as a PI. But the blonde who’s been after me this morning must hate the task with a passion.

Wariness wars with pity in my heart, as I watch her round the corner. The gal is pretending to window shop on a dingy street, when she’s groomed to perfection and wears Prada. Or, maybe, it’s not Prada. Maybe it’s some other designer who decks out the rich and powerful so they look even richer and ever more powerful. The bottom-line is that she must have practiced the art of making herself visible all her life. Her best shot at the reverse is limited to reflective shades. Pathetic.

Holy hell, I was a tad worried!
I thought you were talking about my snippet of the first chapter. I mean I screwed up crazy, but gosh that startled me.
LOL!

Anyway moving on your story sentences is really good.
It seems like the character really dislikes their job and whatnot.

There’s a lot of backstory in your first paragraph! It’s kind of impressive how much of your world you introduced right off of the bat, while also introducing your MC’s distaste of it all. I do personally feel like I’d get lost with so much information if it wasn’t shown further later on in the chapter, though I’m assuming that will end up being the case

This is from my most recently re-written offline chapter. It doesn’t introduce the surreal fantasy elements so it’s 100% going to get deleted later, but I thought it was fun enough to share!

Leia huffed in return, sticking her head out of the opened window as she turned into Entrance One.

Atlas could only peer behind him and send a mental apology to the other driver. There was no diffusing Leia. She’d bull her way through the parking lot of Mission Hospital like it was the mall, and there was nothing he could do about it.

There’s a lot of backstory in your first paragraph! It’s kind of impressive how much of your world you introduced right off of the bat, while also introducing your MC’s distaste of it all. I do personally feel like I’d get lost with so much information if it wasn’t shown further later on in the chapter, though I’m assuming that will end up being the case

Are you mentioning me? Honestly, I am glad you are telling me that, but I starting to really consider that fact that I am not a reader or better writer the real problem here.

Something has got to give.

Yes! Sorry, I should’ve @ you! Why do you think that? That you’re not a writer?

I don’t know! I would be a much better writer if I read more books.
Reading fiction is an ABSOLUTE chore for me that I can not explain. Like whenever I read a book with nothing but words, I get so bored, my mind gets so cluttered, and I can not see what is happening in the story.

Sure I can listen to audiobooks, but those are just as time consuming as the physical copies if not more.
All I wanna do is write instead of read and that doesn’t even make sense.

What kind of writer doesn’t like or enjoy reading?

Sorry for being a downer! I didn’t mean to do that!

I’ve been avoiding writing. Let’s see what I have on my phone:

“Current theory holds that the magical languages of the rift-sheltered are distinct by species.”

You are completely fine!! Reading sometimes can be a chore, especially when you’re reading from a writer’s POV with the intention of learning from it. At least, that’s my experience! When I accidentally find myself reading a book and just get lost in it, that’s when I truly enjoy reading. Otherwise, I really struggle to without frequently critiquing it, putting it down, or just in general forgetting why I’m reading it in the first place. So, I very much relate to your struggle!

But honestly, I feel like reading webcomics and other forms of story telling are just as fine (I’m just assuming webcomics because that’s the first no/less word stories I can think of). Like, you’re still learning about characterization, dialogue, plot, setting, pacing, etc. which are all necessary for any story. The difficulty will be translating that to your chosen method of story-telling, since a picture can portray a lot more than a sentence or sometimes even paragraph can. But I feel like you can learn that just from getting feedback from other writers, as well as reading short stories or novellas which take a little less time to read and I personally find I focus better reading them.

I don’t know how helpful or encouraging that is, ahaha. But that’s my opinion, coming from a writer who also doesn’t read as much as I should! I’m not a great writer and probably won’t be for a long time, but I enjoy it when I do write, and I feel like that’s good enough for me.

✧･ﾟ: * ✧･ﾟ:* You don’t have to take this day all at once, but rather, one step, one breath, one moment at a time. You are only one person. Things will get done when they get done.✧･ﾟ: *✧･ﾟ: *

Oh my gosh! Thank you so much for understanding!

I do read manga and webtoons, but it is not enough. I swear I need to read more visual fiction and really get immersed into the characters and world and the story overall.

Do it!! That sounds like a lot of fun, and if you enjoy it, don’t stop yourself!

Thanks again for the help. 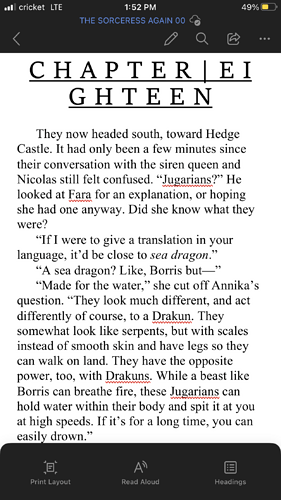 Wow, you posted a picture! That makes this even more exciting!

You get a sneak-peek of my upgraded Lunar Heart, Shadow Bound which not even readers on Wattpad are going to see. After I finish rewriting and editing, it’s going straight to betas and then an editor.

Under the stars, the scent of burning wood permeated the air as flames licked the Moon Forest, the last hunting grounds for the Makiista, and those unable to escape, cried out for help, but their calls were cut short. Pinti lay on her side on the ground, the heat of the fire making her dizzy. She spotted a felissi dashing out of the forest. The rabbit-sized creatures were similar to her race Kathula with the difference being that they couldn’t walk upright and didn’t have opposable thumbs or blue fur. Another followed and another. But no blue fur dragged themselves out to escape the fire. There were at least four in there with her, flanking her sides, protecting her as she was their leader’s daughter.

The phrase “hunting grounds” is referencing a song, actually

Something I’ve got saved under, “Eff it, I’m the Villainess” is this:

They say that your life flashes before your eyes when you die. Hell, lots of people have told me that. But at the end of all things, that’s not what I got. Instead, it was moments of semi-lucidness that strobed between fully aware and deep oblivion. And I hated what I saw.

I like the idea that life flashes before her and she hates every frame of it.

Here is one of the snippets for potential ideas: 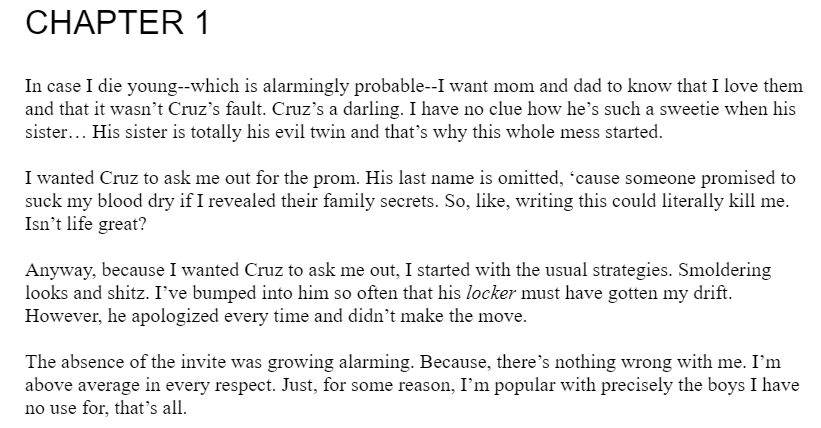