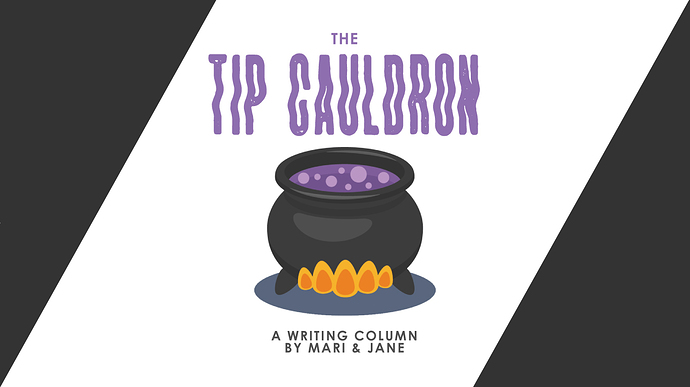 Welcome one, welcome all to the fifth edition of the Tip Cauldron! Can you believe it’s been five months already?? Phew, how the time flies! You might have not even noticed we’re a day late. Or at least, I hope you didn’t! You know, sometimes life...happens. Anywho! We’re here now and we’ve brewed up some delicious answers, including a guest appearance from our very own Site Wizard, CJ! Her Benevolence has been kind enough to grant her generosity upon us. Last but not least, an important announcement will follow at the end and, as always, remember – the tips provided may or may not work as advertised. Let’s get into it!

I don’t think there is a set-in-stone rule for this, but I would say titles of other works are generally referenced in italics. That’s the way I prefer myself, since I reserve quotation marks solely for dialogue. I might use single quotes instead of italics sometimes, though. The trick is to just be consistent within the same body of work.

When writing titles, particularly in dialogue, do you spell them out (e.g. Doctor Karmozen) or shorten them (Dr. Karmozen)?

I would say that is a matter of personal preference. I think Dr. might be more common, in the vein of Mr./Ms. and it’s also shorter, so definitely more convenient as it takes less time to type. Again, consistency is key, so whatever you decide on, just be constant.

How to write fight scenes, especially fantasy scenes where they’re just throwing fire and lightning instead of blades and fists?

The Site Wizard has spoken thusly:

If you write out a fight scene blow-by-blow (“He punched. She kicked. He stumbled.“), readers will skim it. Instead, you should focus on what the characters are feeling. Use the five sense as a guide. What is your character hearing? Smelling? Tasting?

The satisfying crunch indicated she’d broken his nose with her fist.
The taste of copper filled her mouth.

That’s not to say carefully interjected action sentences shouldn’t exist in fight scenes. Use them when you need to indicate speed. Fights move fast and you want your reader to feel that momentum. Short, punchy (pun intended) sentences make action scenes read faster, while longer, descriptive sentences help show a lull (like between blows) of a fight scene.

When you add magic into the mix, you have a great opportunity to show what the magic in your world does. Does your character have a physical power, like fire? Mention how her eyes squint against the bright light, or how the blazing heat was more like a warm breeze. If your character is on the unfortunate receiving end, this is another opportunity to engage the senses.

The choking smell of burnt hair filled the air.
Her skin seared and blistered with the heat.

And most of all, keep your fight scenes short, ideally between a page or two. All the evocative language in the world won’t save you from readers thinking, “Okay, we get it! They’re fighting!”, after the first couple paragraphs. Even in novels about war or conflict, the fight scenes are kept short because they need to have impact. Like with every other scene in your book, fight scenes should exist to propel the plot forward, not just give your characters “something to do”.

How much backstory is ‘too much’? How do I make sure I don’t overwhelm the reader?

These were two separate questions, but I find them strongly related, so I shall answer them together! Because the quickest way to overwhelm your reader is certainly with an ‘info dump’ of backstory.

How much is too much? Well, the short answer is: anything that does not move your plot forward or otherwise service your storyline is ‘too much.’ Anton Chekhov put it best, in the phrase that ultimately became known as Chekhov’s gun:

If in the first act you have hung a pistol on the wall, then in the following one it should be fired. Otherwise don’t put it there.

The long answer is that a backstory dictates almost everything about a character – who they are, what they do, which decisions they make – which, in turn, powers your narrative. Revealing this backstory to your reader is a crucial building block for your plot, but you must always take care to stay on track. Not every little aspect of your character’s past or quirk of their personality will have an impact on the story you’re telling.

For instance, it doesn’t matter how they drink their coffee if the story never offers them a chance to have one. It does matter if they learned to shoot guns as a kid and now have to fight for survival in a zombie apocalypse.

Moreover, by sticking to plot-relevant snippets of your character’s backstory, you also reduce the risk of overwhelming the reader with unnecessary information. And you keep Chekhov’s ghost happy. Win-win, right?

Overwriter’s question: what are some ways to cut down a 120K-word draft?

This overwriter’s question receives an overwritten answer. Buckle up.

First off, remember how we talked about repetition not being a bad guy last month? Yeah, if you feel like your draft is too long, then repetition is the first thing you’ll want to look at. We, writers, really like words, especially when we come up with clever combinations of them, so sometimes we may end up saying the same thing several times in different ways. Something I struggled with recently, for example:

The sun rose over the Hollywood sign, painting it pastel, as a red LaFerrari tore through the silence of Mulholland Drive at dawn.

Pretty, right? Some nice alliteration in there, setting the scene…except – do I really need to say the sun is rising at dawn? I liked the second half of the sentence more than the first, because Mulholland Drive already places me firmly in the Hollywood heart of Los Angeles and the road itself is plot-relevant, as opposed to the sign which is just…there. So, I changed it to:

The Hollywood sign had whizzed by earlier as his red LaFerrari tore through the silence of Mulholland Drive at dawn.

That makes it more dynamic and takes me inside the car, which is where the interesting stuff is happening.

Secondly, we also talked about subplots a while ago and how important they are to layering your narrative. However, subplots run the risk of sidetracking you, so you might want to employ Chekhov’s gun referenced above and trim backstories or side quests that do not add much to your main storyline.

Thirdly, adverbs seem to be something that most folks in the writing world hate. And I can see why – most adverbs end in -ly, which can become repetitive fast. Moreover, using too many adverbs might indicate a structural problem, as you’d be prettying up a lot of verbs and maybe not as many nouns. So, keep an eye out for adverbs in your edit, axe them or reword your sentences. Personally, I would apply the same treatment to adjectives, too, just so there’s a nice balance of both.

And lastly, one thing that often strikes me as redundant in stories are dialogue tags. It’s true that he/she said is invisible, but should be used sparsely to avoid repetition. It’s also true that whipping out the thesaurus to find clever replacements usually backfires. And it’s definitely true that action tags do more than just identify the speaker and thus help bring a scene to life.

Yet I raise you this: you do not need tags as often as you might think. I once read that when writing a screenplay, you should refrain from adding too many action tags (such as ‘he smiles’, ‘her brow furrows’ etc.), because you should give the actor room to interpret the lines. That’s a piece of advice suitable for prose, as well – allow the reader some room for interpretation. So, see if there’s any dialogues you can strip down to reduce that wordcount.

How do you balance heavy, painful conflict threads with more light-hearted moments?

Something that I often do without necessarily realising it are contrasting scenes. If, for instance, my protagonist has a strained relationship with/has lost a parent, they might end up befriending someone with a nice family. While witnessing a hilarious father-daughter moment, my protagonist might reflect on how much they would have liked that in their own life.

So, I always try to infuse some good to balance the evil, some happy to balance the sad, some light to balance the dark. That usually means that my tortured character either finds/builds a support system along the way or maintains some hope/ambition to succeed despite adversity. One of my protagonists is a nurse who’s lost everything in the First World War – but then, a mysteriously cheerful stranger shows up and his bright spirits are contagious.

Most important, however, is a sense of humour. There must always be somebody in their circle, if not the protagonist themselves, who has a solid sense of humour – even dark humour – and doesn’t take themselves too seriously. A bit of self-deprecation or admonishing the brooding protagonist will inevitably lead to funny scenes that should take the edge off the more dramatic ones.

And that is all, folks, thanks for tuning in! As for the announcement – it’s a bit of bittersweet news. While we very much love reading and answering your questions, it’s become clear that the Tip Cauldron in its current format is not the most sustainable. We’re a discussion-based forum and asking questions that get answered weeks later doesn’t fit in all that well. As a result, we’ve made the difficult decision retire the Tip Cauldron for the moment, so we can find better ways of providing you with useful and entertaining content. Thank you so much for your support so far and until next time!

Thank you for the tips! They were really detailed and amazing as usual

Ah, I can’t believe it’s five months already since the first Tip Cauldron! The blog was fun to read as always!

Can’t wait to see what you guys’ll think of next – I’m looking forward to tip cauldron 2.0!

They were really detailed and amazing as usual

Thanks for checking them out! Hope it helps

Ah, I can’t believe it’s five months already since the first Tip Cauldron! The blog was fun to read as always!

Can’t wait to see what you guys’ll think of next – I’m looking forward to tip cauldron 2.0!

Honestly… Same, to all of this

Learning new things together is so much fun, just gotta figure out a way to meet our community’s needs better